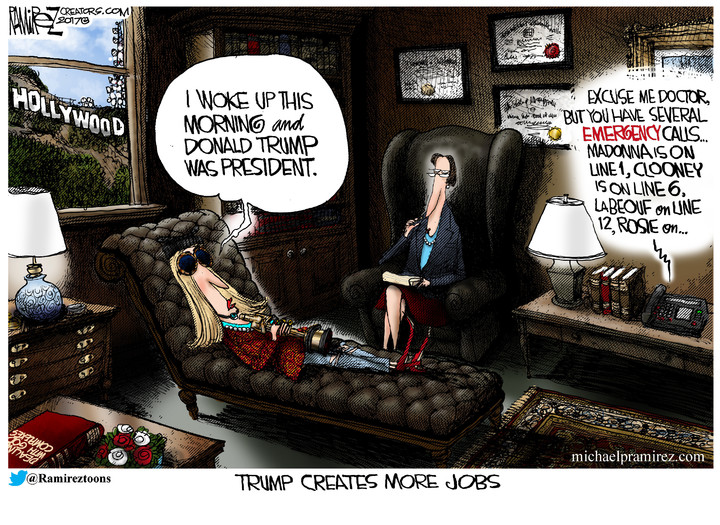 Did the phony, hypocritical liberal celebrities who made fools of themselves during the 2016 campaign not get the memo? I am specifically referring to all the useful post-election analysis that should have clued them in to how little their opinions mattered in the political realm, and what their utility might be in the future. Even back in 2014, a CBS News poll showed that 61 percent of Americans thought Hollywood had "too much influence on American politics and social values."

To remind everyone, celebrities from Beyonce to Leonardo DiCaprio to Katy Perry appeared at Hillary Clinton rallies, held concerts in support of Clinton and produced what they obviously thought were really cute, funny videos trying to get people to vote for Clinton. But, as Maureen Callahan so succinctly wrote in a smart piece for Page Six entitled "Why celebrity endorsements didn't help Hillary at all," "Those who have money, fame, privilege and status and have no cause to worry - and fail to do so - can only further divide the country and alienate those who, rightly, feel unseen, unheard and looked down upon."

And, Callahan wrote, after Clinton lost, "those celebrities who reacted publicly often did so with a pungent brew of self-pity, condescension and didacticism." Sarah Jones, writing in the New Republic, may have said it best: Clinton's "campaign employed a candy-colored brand of female empowerment seemingly based on the assumption that white women's political priorities are influenced by the pop culture they consume."

Anyway, the wasted efforts of celebrities gave us such memorable performances as Lena Dunham's cringe-worthy "Sensual Pantsuit" video and Jay-Z's big concert, aimed at mobilizing the young African American community in the swing state of Ohio. After Clinton lost the election, there was much weeping and gnashing of teeth, and the celebrities who had vowed to leave the country if Donald Trump won came down with the requisite amnesia. Unfortunately, they were not also struck dumb.

Rather than learn their lesson, it appears that the self-centered and tone-deaf celebrities who were supposed to know something about the American zeitgeist and appealing to their audiences have doubled down, engaging in more self-righteous rhetoric and overblown, fashionable-on-the-left social media freak-outs about President Trump's inauguration.

Maybe I shouldn't have expected any self-reflection or understanding of the post-election analysis, since I don't think of many of them as being particularly politically literate or as being avid readers, especially not when the news is critical or questions their own public appeal.

And the whining, panic and tantrums have only amplified since November. In the last week alone, we've seen theatrical outbursts from celebrities that remind those who voted for Trump exactly what they don't like about celebrities gratuitously inserting themselves into their political decision-making.

Kate Rich, a B-list wannabe from "Saturday Night Live," took a stand by writing a tweet picking on Trump's 10-year-old son. During the extremely vulgar and militant women's march in Washington, no less than washed-up singer Madonna mused about blowing up the White House.

When will she relieve us of having to witness her now more than a decade-long, "I swear I'm still relevant" tour?

Don't even get me started on Ashley Judd's delusional rant at that same protest march. And finally, we have Chelsea Handler, the self-absorbed, unfunny, tries-too-hard "comedian" who says she's too good to interview Melania Trump and makes fun of the first lady's accent. Really? I suspect the Trumps haven't lost any sleep over the fact that they will not be appearing on Handler's show. I didn't know she still had a show until I read about her refusal to grant the first family the privilege of appearing on it. It's pathetic.

The answer should be clear, but the fact that they don't get it and won't accept Trump as president says a lot about who they really are and what they really know.