Memo to Meryl: A Simple 'Thank You' Would Have Sufficed 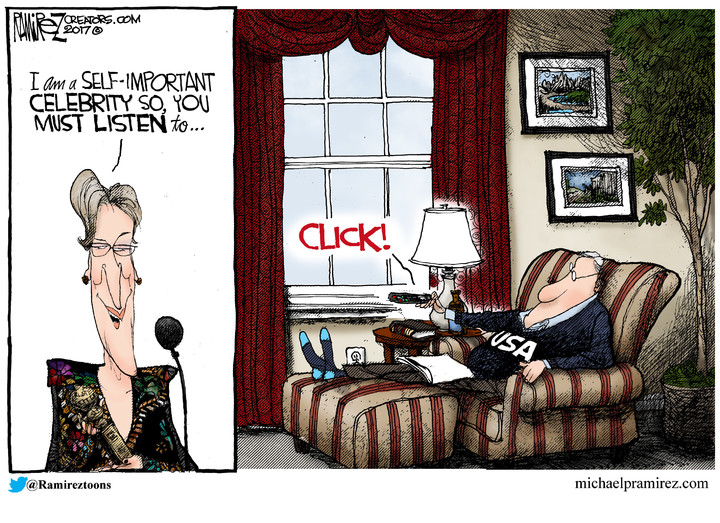 By now Meryl Streep's well-rehearsed performance at the Golden Globe awards may feel like old news. But like so much of Ms. Streep's work, it stays with us long after the show has ended.

A less skilled performer would have called Donald Trump out by name, and not just once or twice, but over and over - and in a loud, angry voice. Ms. Streep never uttered his name in her 5 minute and 47 second speech - even as she calmly berated him to a worldwide TV audience.

I'm still thinking about her observation that "All of us in this room really belong to the most vilified segments in American society right now." The remark haunts me all these days later because I had no idea that beautiful people who make millions of dollars and live in luxurious houses in Beverly Hills were such victims. Thank you Meryl Streep for pointing this out to me and to so many other un-cool people who didn't know.

She talked about diversity, about how so many actors in the room came from so many different places in America and around the world. But it apparently never crossed her progressive mind that while the room - and Hollywood in general — was loaded with geographical and ethnic and racial diversity there wasn't much ideological diversity there - or for that matter, in Ms. Streep's line of work. If you're a conservative in Hollywood, let's just say you don't brag about it.

Imagine if a Golden Globe winner had taken the stage and said, "I agree with much of what Meryl Streep said a few minutes ago. I think it was deplorable that Donald Trump mocked a reporter with a physical disability. And I don't believe him when he says his critics have it all wrong, that he would never would do such a thing. And I also agree with Meryl when she said that a principled press must hold the powerful accountable.

Too bad she didn't say that during the entire eight years of the Obama presidency. This may come as news to those who work in Hollywood, but for many Americans Donald Trump represents hope. He represents change. He is a symbol, a middle finger extended in the direction of elites who think they're smarter than ordinary Americans, and better too. We here in Hollywood are out of touch with Middle America.

And I think many Middle Americans will view Ms. Streep's speech as one more example of the elitism they don't like. Ms. Streep deserves the lifetime achievement award she was given. She is a great actress. But Americans don't want rich, privileged, and yes, too often sanctimonious actors lecturing them about how if Donald Trump kicks all the foreigners out of America all they'll have left is football and mixed martial arts. That sounds like a nice way of calling them deplorable. And I know you're going to hate to hear this, but the liberal mindset of our community is one of the reasons Donald Trump won. We may be different than ordinary Americans. But we're not better. Thank you for listening."

There's a good chance the poor SOB would not only be booed off stage but also booed out of town and out of his livelihood.

What the glitterati in Hollywood don't quite comprehend is that most Americans don't care what they think about politics. If they did, Hillary Clinton would be the president-elect, given all the Hollywood endorsements she received.

And they don't tune in to a celebrity awards show to hear what Meryl Streep thinks about Donald Trump. She won a lifetime achievement award; so here's an idea, Meryl Streep: Talk about your life in the movies - not politics.

Responding to Meryl Streep, Donald Trump behaved the way he usually does when attacked. He took to Twitter and called her "one of the most over-rated actresses in Hollywood." It's not the first and it won't be the last time Donald Trump says something both childish and incorrect.

Finally, after the Golden Globes, an LA friend reminded me of something the late screenwriter Paddy Chayefsky said at the Oscars ceremony in 1978. When Vanessa Redgrave won an Academy Award that year she used the occasion to deliver a diatribe against Israel. A short time later, Chayefsky was on the same stage to present another award. Here's what he said about Ms. Redgrave:

"I'm sick and tired of people exploiting the Academy Awards for the propagation of their own personal political propaganda. I would like to suggest to Ms. Redgrave that her winning an Academy Award is not a pivotal moment in history, does not require a proclamation, and a simple 'thank you' would have sufficed."

It's not a bad piece of advice that Meryl Streep might want to consider the next time she's on stage getting an award.


JWR contributor Bernard Goldberg, the television news reporter and author of several bestselling books, among them, Bias, a New York Times number one bestseller about how the media distort the news. He is widely seen as one of the most original writers and thinkers in broadcast journalism. Mr. Goldberg covered stories all over the world for CBS News and has won 10 Emmy awards for excellence in journalism. He now reports for the widely acclaimed HBO broadcast Real Sports.