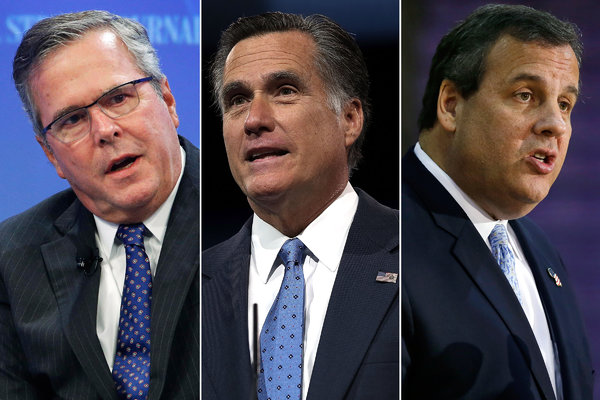 My endorsement record for successful political candidates is very, very spotty. That could be because I live in a very blue city in a blue state and I am a conservative. My endorsements of Rudy Giuliani and George W. Bush succeeded only because their opponents were a non-issue. I do have the ear, however, of many right wing and tea party voters and it is quite clear that they feel the media is pushing Jeb Bush and Mitt Romney down our throats. I dare say that neither of these men nor Chris Christie would win a Republican primary.

If by some fantastic chance, one of them survives, then I would be forced to hold my nose and vote for him. Let me be very clear, Mitt Romney and Jeb Bush are good men and would probably make good presidents but the GOP has a very large field of excellent and better candidates to choose from.

I voted for Mitt Romney and thought he would make mince meat of Barack Obama's pathetic record but a combination of voter fraud, media malfeasance and a weak debate performance did him in. Mitt's a nice guy, very competent but this is the toughest job in the world and he caved to CNN's Candy Crowley when he should have gone for her jugular.

Jeb Bush probably would have made a better president than his brother but he has much more baggage because of his immediate family. His daughter was arrested in 2002 and sentenced to rehab where she was caught in possession of crack cocaine. His wife, a Mexican immigrant was caught lying to customs about 19K in clothes and jewelry but Jeb's biggest problem with conservatives is his unflinching support for Common Core. Either he doesn't know how bad this educational protocol is or is just plain headstrong. Nope, save your money and time, Jeb, and stay home.

For the life of me, I can't understand why the Democrats can't come up with more electable candidates than Hillary Clinton or Elizabeth Warren, The first was recently named the most admired woman in a Gallup poll that apparently only polled the brain dead and the latter who is blonde and blue eyed claimed to be a Native American to land a job at Harvard. She is known on the Internet as Fauxcahontas.

The GOP has several qualified candidates and the strongest will win the GOP nomination only if they promote an agenda that satisfies all Republicans. No matter how the media loves to spread the rumors that there is a rift in the party, the truth is that most Republicans want the same thing for the country. We want a smaller central government with more power given back to the states. We want a stronger military and more benefits given to veterans. We should have tax cuts because our government is a bloated behemoth that needs to be cut drastically.

All one needs to do is study Sen. Tom Coburn's Wastebook which he releases every year to highlight the ridiculous and wasteful government spending. Most importantly, we need a president that will grow a pair of giant cojones and not go around the world apologizing for being the greatest country that we can be.

Although we've seen how stupid it was to elect a president with no experience other than being a leftist community organizer, it is vital that we elect someone who has real executive experience and that should be a governor. We have several governors on the list that could do well but it is important to note how well they governed. Ronald Reagan was a great governor in California and transformed it magnificently as did George W. Bush in Texas. We've had two Democrat governors-Jimmy Carter and Bill Clinton who were governors of states that ranked at the bottom economically, yet they were elected anyway because like Jonathan Gruber said, the American voter is dumb.

Jeb Bush was a good governor in Florida but has too much baggage. Chris Christie is a so-so- New Jersey governor who's a bit too palsy with Obama. Mike Huckabee has a good TV show and should stay there. Gov. Scott Walker is a strong candidate who's stood up to the unions as governor of Wisconsin but still has his work cut out for him to improve the state's economy. Gov. Bobby Jindal as governor of Louisiana really has had a huge uphill battle to salvage his state from years of corruption and needs more time to succeed in doing that.

Most conservatives are pining for some tea party favorite like Ted Cruz to win but I say-No More Lawyers for president and no more from Congress- Sorry, Sen. Rand Paul. Give me an actor like Reagan or, how about a cowboy like Rick Perry? No secret that he has been my preferred choice since 2012 in spite of his botched senior moment during the primary debate. He has been the longest serving governor of Texas and that state is ranked number two for business and job opportunities and is still growing.

About 30 percent of all the jobs produced in the nation during his time as governor were produced in his state. His ideas for tort reform, tax reform and elimination of useless agencies like the EPA and Dept. Of Education are worthy notions and just might be possible with a Rino-free GOP Congress.

Most importantly he is a strong leader who has strong ties to Israel, is pro-life and was a captain in the U.S. Air Force. He is, in fact, the quintessential anti-Obama and not a product of the Ivy League Marxist academia.

My favorite joke about him demonstrates why I would love him to be our president. It's a comparison between how things work in California and Texas,

When Rick Perry appeared on the Jimmy Kimmel show, he was asked if that story was true (it is) and if he really jogged with a gun. Rick Perry paused and grinned saying, "I do interviews with a gun."

I can't imagine a President Perry apologizing to Putin or bowing to any Middle East potentate. May I remind all that Ronald Reagan lost his first primary in 1976 to Gerald Ford so here's hoping we give this cowboy another shot.