How to Steele an Election 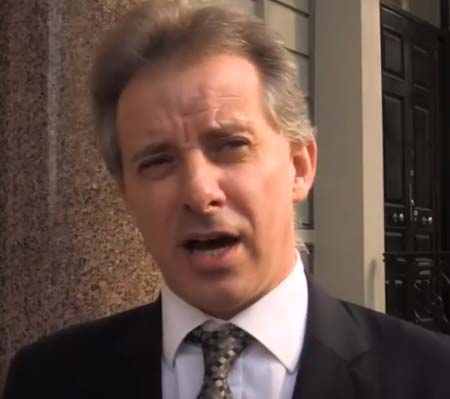 From Shattered: Inside Hillary Clinton's Doomed Campaign by Jonathan Allen and Amie Parnes:

Mostly she was mad - mad that she'd lost and that the country would have to endure a Trump presidency... Hillary kept pointing her finger at Comey and Russia. 'She wants to make sure all these narratives get spun the right way,' this person said.

That strategy had been set within twenty-four hours of her concession speech. Mook and Podesta assembled her communications team at the Brooklyn headquarters to engineer the case that the election wasn't entirely on the up-and-up. For a couple of hours, with Shake Shack containers littering the room, they went over the script they would pitch to the press and the public. Already, Russian hacking was the centerpiece of the argument.

"Mook" is campaign manager Robby of that ilk, and "Podesta" is John, her campaign chairman and, with his brother Tony Podesta, one of the two Podestas who founded the Podesta Group, now under investigation for violating the Foreign Agent Registration Act. But I'm getting ahead of myself. Notice Mr Allen and Miss Parnes' choice of words: Whether or not the election in reality "wasn't entirely on the up-and-up", Messrs Mook and Podesta and the rest of the Clinton team decided to "engineer the case" that it wasn't.

And engineering-wise they did a pretty impressive job, as you'll know if you're one of the impressionable rubes who gets his news from ABC, CBS, NBC or CNN. If the campaign team had worked its precision engineering half as well on the actual campaign, they would have won the election "on the up-and-up" and saved themselves the need for a post-election campaign.

By "Russian hacking" of the election, they mean that some Internet trolls from halfway round the world bought a few fake Facebook ads, half of which weren't seen until after election day. For purposes of comparison, the one hundred grand these trolls spent to "interfere" in the US election works out at less than two per cent of what Hillary paid a high-ranking spy of a foreign power to interfere in the US election ...and post-election.

It started in April 2016, when it became clear that Trump was going to win the Republican nomination. The Hillary campaign and the DNC gave millions of dollars to Marc Elias, a Clinton lawyer, who in turn hired Fusion GPS, who in turn hired former MI6 agent Christopher Steele. Why use Mr Elias as a cutout? Because Hillary and the DNC could then itemize the expense as "legal services" rather than list payments to Mr Steele, which would be in breach of federal law.

Mr Steele used to be head of "the Russia house", to go all John le CarrĂ© on you. So he asked his contacts in Moscow to come up with some stuff on Trump, and they responded with some pretty thinnish material that Steele managed to stretch out to a total of about 33 pages. I can tell you, after six years in the fetid craphole of the District of Columbia Superior Court for the Mann vs Steyn case, that the most routine procedural motion therein runs at least three times the length. The most "salacious" (in James Comey's word) assertion of the dossier is that Trump likes getting urinated on by Russian hookers. Having met him, I regard this as most unlikely: He is a germaphobe who resents having to do all the unhygienic gladhanding required in American politics. I find it easier to imagine almost any other Republican bigshot enjoying the erotic frisson of micturition, if only from Chuck Schumer. But judge for yourself: You can read the dossier here.

At which point things took a strange and disturbing turn. Steele's dossier was passed along to the FBI. It seems a reasonable inference, to put it as blandly as possible, that the dossier was used to justify the opening of what the Feds call an "FI" (Full Investigation), which in turn was used to justify a FISA order permitting the FBI to put Trump's associates under surveillance. Indeed, it seems a reasonable inference that the dossier was created and supplied to friendly forces within the bureau in order to provide a pretext for an FI, without which surveillance of the Trump campaign would not be possible.

In October 2016, things took a stranger and more disturbing turn. Steele "reached an agreement with the FBI a few weeks before the election for the Bureau to pay him to continue his work". In other words, the permanent bureaucracy and the ruling party were collaborating to get the goods on their political opponent, by illegally paying a foreign spy to interfere with the election. Why would the most lavishly funded investigative agency on the planet need the services of a British subject and his modest consulting firm? Not just for plausible deniability but also for plausible reliability: Hey, investigating Trump would never have occurred to us, but the former head of the Russia desk at MI6 thought we ought to know about this... Which, in case you haven't noticed, is the precise equivalent of Bush crediting British intelligence as the unimpeachable source for his belief that Saddam Hussein was seeking to acquire yellowcake from Niger.

A month later, Trump did the impossible and won the election. And within twenty-four hours Mook and Podesta had begun "engineering the case" that the election "wasn't entirely on the up-and-up". On November 18th, Andrew Wood, formerly British Ambassador in Moscow, and John McCain, the Senator from Arizona and fierce Never Trumper, met at the Halifax International Security Forum in Nova Scotia. Sir Andrew told Senator McCain about the dossier and said he'd known Steele when they were both on Her Majesty's service in Russia and that he was a splendid chap, very sound and awfully decent.

One month after the election, on December 9th, McCain met with FBI Director Comey and handed over the dossier. It is not known if Comey replied, "Oh, this old thing? As a matter of fact, we used it as a pretext to get surveillance warrants on Trump. Do you know what it's like to sit through hours of phone transcripts about how 'The Apprentice"s ratings have tanked since they hired that loser Schwarzenegger?"

Do you sense the ground shifting here? At some point someone somewhere might well have genuinely believed they were asking Christopher Steele to find something on Trump that Hillary could use to destroy him in the media and win the election. Mr Steele failed to deliver. This is not necessarily his fault: There may, indeed, be nothing to deliver.

But there was enough of a pseudo-dossier, by the debased standards of the bloated US "intelligence community", to be used as a pretext to get the rubber-stamp FISA court to approve 24/7 surveillance of everyone around Trump - and maybe that would turn up something to destroy him.

But, again, it didn't. Every sentient creature knows that - because everyone understands that if they'd found anything they'd have leaked it.

So once again the worthless dossier was pressed into service, this time to bolster the case that the Russians had stolen the election from Hillary. During the stupid and anachronistic two-and-a-half-month electoral "transition", the outgoing Administration worked round the clock to de-legitimize and cripple their successors. The Director of National Intelligence, James Clapper, a dismal and deeply compromised individual, told Jim Comey to set up a meeting with Trump and present him with the dossier. Which he did. Supposedly, Comey felt that he needed to disclose to the President the existence of a report of his supposed sexual predilections: So the G-Man briefed the Pee-Man. As I said to Tucker Carlson on Wednesday, it is yet another reasonable inference that the only purpose of this meeting was to enable the leaking of the meeting - and thereby damage the incoming President: The briefing was arranged as cover for the leak thereof.

All this from one dodgy dossier compiled by an MI6 agent with deep ties to FSB operatives in Russia. Has any one foreigner so interfered in a US election as Christopher Steele? Hillary and her chums needed Steele for oppo research. The Deep State needed Steele as a cover for wiretapping the Trump team. The Never Trumpers needed Steele to mire the incoming President and hobble him from the get-go. And the outgoing Administration needed Steele to bolster their narrative that Trump and the Russians had colluded to steal the election. In fact, Trump seems to have fewer "ties" to Russia than almost any other multinational businessman of comparable wealth, and certainly fewer ties than the corrupt Clintons.

Many things can be deduced from this scandal: Robert Mueller should retire, preferably somewhere far, far away. James Comey should be charged, convicted and jailed. So should senior figures in the Clinton campaign. And those large sections of the "intelligence community" that have gone rogue and spend more time subverting their own government than any foreign enemies need to be overhauled from top to toe, or, more likely, put out of business entirely.

Thus Washington's vast wilderness of distorting mirrors: as I told Tucker Carlson, everyone was colluding with the Russians except Trump - Hillary, the DNC, Democrat lawyers, the FBI, all frantically pointing fingers at the only non-colluding guy in the room. No man anywhere has ever been less in need of a "golden shower" than Donald J Trump. He is surrounded on all sides by powerful forces leaking on him incessantly.