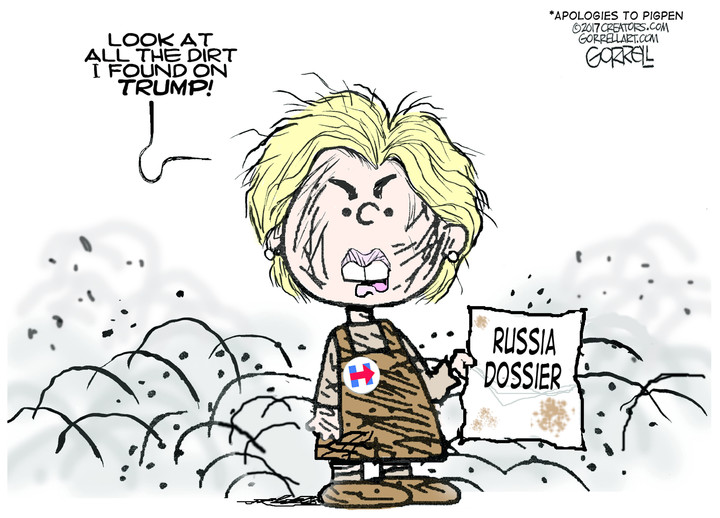 If success has a thousand fathers and failure has none, then who's the daddy of the Fusion GPS story now rocking the ?

Lest you condemn me as a "science denier," let's stipulate there must be at least two parents, or maybe even three.

According to the , the Hillary Clinton presidential campaign and the gave birth to the salacious "," compiled by the -based research firm of Fusion GPS and a former British spy. The Clinton campaign and the funded the operation.

And that dossier, now properly seen as opposition research, served as the launching pad for the federal investigations into role in the 2016 elections. It also served as fuel for media snark around the Trump/ collusion story that has dominated political news since Clinton lost her election.

Some reporters are now saying they were lied to by lawyers for Fusion GPS for more than a year. The has run for cover.

And demand -- what else? -- more congressional investigations, as if we don't have enough already.

President , like a Visigoth on the throne of empire, thumps his chest and claims vindication, while branding anything he doesn't like to read as "fake news."

And Hillary? "What happened," Hillary?

Please don't tell me it's just a slice of fried bologna.

Here's hoping we'll find out through the investigation of special counsel , who, we hope, examines all angles thoroughly and reports it all out without partisanship.

But given the temperature of the thing, this also might turn out like one of those horrid paternity tests served up to howling studio audiences on lurid daytime TV.

Americans may find that this one has a third parent: Beltway journalists, who may have allowed themselves to be manipulated by a political intelligence operation in exchange for peer praise, the warmth of social media tribalism and clicks.

This hurts the many journalists putting partisanship aside to follow stories wherever they lead.

And it hurts the republic, which depends on credible, rigorous media oversight of the powerful, especially the imperial presidency.

But once you lose your name and credibility, where are you?

I hope all this worries you, no matter what political tribe you belong to, because for more than a year now, that has been shrieking about this and Trump that and collusion this and collusion that.

The Trump-Russia collusion theme has been a chorus of barking dogs everywhere you turn, in online news hyped to feed anti-Trump appetites, on cable, where the appetites are sated, and even in happy-talk banter of radio and TV news anchors.

The driving force has been a partisan desire to excuse for losing her 2016 election to Trump. It's been aggressive and passive and all Russia-Trump all the time.

Many, but not all, of the stories have been debunked, and precious little, if any, evidence has come out of the congressional investigations directly linking the president to an alleged effort by the Russians to steal Clinton's presidency.

pick his teeth with the bones of creepy former Trump campaign manager ? That seems likely. And -- of the Democratic Chicago Podestas -- has come under scrutiny too.

is the mining company controlled by the Russians. More than $140 million was donated to the by board members and associates. And Bill got a $500K chunk for related speaking fees in , because, well, he was such thrilling speaker when his wife was favored to win the .

What's appalling is that the Obama administration quietly approved the deal handing 20 percent of American uranium reserves to the Clinton-friendly Russian mega-company, so that President could curry favor with to win support for his nuclear policy.

It's all layered, like a real estate deal benefiting a favored politician, and when the thing is no longer hidden, we're expected to fill our pipes full of Hopium and dream away.

Given the twists and turns of all things Trump, there will be a safe time when they can pile on. But isn't that the work of pamphleteers?

Progressive journalist , no fan of , is no pamphleteer.

Greenwald has debunked, chronicled and mocked many of the Russia-Trump stories that generated millions of clicks but didn't stand up because they were untrue.

And before the Fusion GPS connection broke in the , Greenwald was interviewed by on Trump/ and journalism.

"I think at best what you can say for (journalists) is they're willingly and eagerly being manipulated," Greenwald told Carlson on his program. "What you see over and over is that they publish really inflammatory stories that turn out to be totally false, and what happens in those cases? Nothing.

"They get enormous benefits when they publish recklessly," Greenwald said. "They get applause on social media from their peers, they get zillions of retweets, huge amounts of traffic, they end up on TV, they get applauded across the spectrum because people are so giddy and eager to hear more about this and Trump story. And when their stories get completely debunked, everybody agrees to ignore, and everybody moves on and they pay no price."

So who's the daddy?

It's always about love, isn't it? Love and clicks.