One Man Against the World 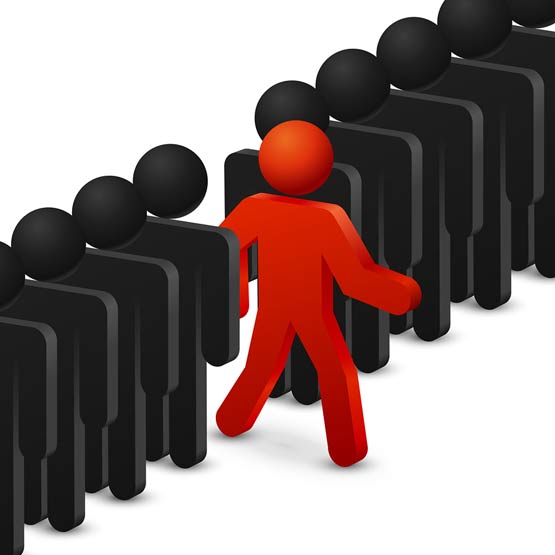 Singled-out and entrusted with an eternal mission

Who exactly was Abraham?

He was a man of free spirit. A man of courage, a nonconformist. A man who did not submit to social conventions, who defied Nimrod — the arch dictator who held his subjects under a reign of terror. Under Nimrod, worship of the regime’s idols — the sun, moon, and stars, and other natural forces — was required by law.

But Abraham questioned the party line.

“At a very early age, he began to wonder about the world. He would think about it day and night, and ask himself, How could it be that this great wheel (the universe) is constantly turning, and no one is turning it? And who brought it into existence — for it could not have brought itself into existence” (Maimonides, Hilchos Avodah Zarah 1:3, based on the teachings of the Sages).

He alone, among the whole society around him, was engaged in these thoughts. Among the blindly obedient masses, he was a single point of distinction.

“He had no teacher and no one to inform him. He was immersed in the society of Ur Kasdim, surrounded by foolish idol-worshippers — his parents and the whole nation were idol-worshippers — and he worshipped with them. But he had an investigative and discerning mind, and he discerned the truth and came to the correct conclusion.” (ibid.)

At the age of three, says the Midrash, Abraham’s spiritual journey began. It was an exhausting journey, full of hardship, suffering, and emotional struggles, until he reached the age of 40. At that point, he emerged from the struggle with a fully-formed faith in the One Above. His great mind had grasped the concept of G0D, the unseen Creator from Whom all powers stem and without Whom there is nothing. He saw beyond the screen of multiplicity and separation that deceived the people of his society, and in the words of the Midrash, he succeeded in “sewing together the tatters” and forming a complete, unified worldview, seeing the Divine's Oneness behind the endless variety in nature.

And then he demonstrated his courage:

Contemptuous of the dangers of proclaiming the truth, he came out with it publicly. Ignoring the threats of the ruling authorities, he expressed his opinion in the streets and confounded the idolaters with his incisive questions. He smashed the beliefs and myths that had become traditional since the generations before him had deviated from the path of Noah.

Nimrod realized that Abraham posed a challenge to his control over the people’s spiritual life. The “refuseniks” who were following Abraham were destabilizing his ironclad rule in Ur Kasdim. Abraham was condemned to death by fire, and as we all know, he was miraculously saved from death and subsequently escaped to Charan, which was situated on the way to the land of Canaan.

That is a synopsis of Abraham’s early history, a short biography of a brave and courageous thinker willing to die for his beliefs, who became the father of the Jewish faith. Yet isn’t it puzzling that none of this story line appears in the written Torah’s account of Abraham’s life?

THE TORAH BEGINS THE STORY of Abraham with this week's reading, Lech Lecha. The Lord speaks to Abraham, telling him to get up and leave his native land, without a word of background about who Abraham is or how he merits this special Divine interest. The traditional commentaries offer many answers to this question, but one consensus is that there is an absolute division between Abraham’s past and his future from that point forward. Up until then, he was the embodiment of human discernment in its purest form.

Up until then, he was the great philosopher who came to recognition of the Creator and His absolute morality. He was a man of high status, a man of influence. But from this point on, he is in personal contact with the Divine, above and beyond his own powers of discernment. He has reached out and made him his particular protoge, placing him on a path distinct from the rest of humanity.

Up until now, he has stood on his own two feet in the realm of human history. But from the moment that the Divine called out to him, he is plucked out of that story and entrusted with a mission. He is chosen. From here stems our status as the Chosen Nation — the concept that has caused us so much suffering, a concept rejected even by many of our own people who see it as discriminatory against other nations.

And indeed, this is a question that demands an answer. Why did the Lord single out Abraham for this special relationship? Were the seeds of racist discrimination sown here?

There is no better source of an answer than the actual verses themselves:

“The Lord said to Abram, ‘Go forth from your land, from your birthplace, and from your father’s house to the land that I will show you. And I will make you into a great nation, and I will bless you and make your name great… and all the families of the earth will be blessed through you” (Genesis 12:1-3).

It’s a call to Abraham to turn his back on the civilization of his time, to cut ties with his family, to travel far from the land of his idolatrous childhood, and to begin a new life in a new land so that, eventually, after a great and blessed nation would come forth from him, all the families of the earth would be blessed through him.

The final goal of Abraham’s mandate of estrangement from his familial roots, down to the last of Abraham’s descendants in our generation, was to bring blessing to the entire world, living by the ethical code of the One G0D.

He, however, did not abandon the human race to its fate as a first choice. He entrusted His mission to Abraham and his offspring only after the moral failure of two thousand years of human civilization. For the world’s sake, Abraham was chosen to show them the way.

One of the world’s great historians, Arnold Toynbee (in the French monthly newsmagazine L’Arche, June 1959), made a fascinating observation about the Jews and their world mission, although he personally was not particularly fond of Am Yisrael (the Jewish nation):

“I dare say that Judaism will bring a new message to the world. Looking from the outside, it seems extraordinary that twice in the course of history the Jews have allowed outsiders to run away with their religion to spread it over the world in garbled form. I am talking, of course, of early Christianity and Islam. It is something almost comic that outsiders should seize some of the essential truths of Judaism, and make a worldwide religion of them while the Jews themselves kept their religion to themselves. Is not the real future of Jews and Judaism to spread Judaism in its authentic form rather than its Christian and Moslem forms over the whole world and human race? After all, the Jews must have a more authentic form of Jewish monotheism than the Christians or Moslems have. And is that not going to be the ultimate solution of the relations between Jews and the rest of the world?”