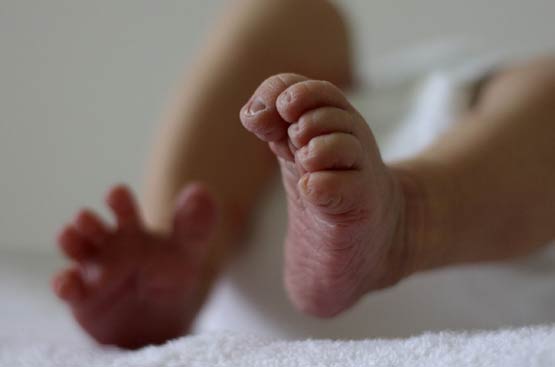 My children are young adults now, but back before they could walk, my wife and I would take their little bare feet in our hands as they lay in their cribs, wiggle each toe in succession starting with the big toe and . . . say it with me:

It always struck me as a little weird that a pig would be eating roast beef. Is there no solidarity in the barnyard? But pigs are, in fact, omnivores. In 2012, according to news reports, they ate a 69-year-old farmer in Oregon after he fell in their pen.

Then the other day I was browsing my Twitter feed when I saw a posting from @AngelicGirlxD that changed everything: "I'm 22 years old," she wrote Aug. 20, "and I just realized that â€˜This little piggy went to . . . market' doesn't mean he went food shopping."

Ye gods. Of course! All these years I'd had in my mind's eye the image of a pig standing on two feet, a hat on its head and a basket under its "arm," waddling off to the grocery store to purchase edibles: apples. Carrots. Grain. Farmer-flavored biscuits.

But no. Obviously, no. I'm 60 years old, and I just realized that the fattest little piggy — the big toe — was being sold into slaughter. It went to the market, sure, but it never came back.

Many of the best-loved nursery rhymes have dark elements. Peter Peter Pumpkin Eater "couldn't keep" his wife so he "put her in a pumpkin shell, and there he kept her very well" in domestic servitude and bondage.

Georgie Porgie "kissed the girls and made them cry," making him the central villain in numerous #MeToo stories.

"Goosey Goosey Gander" takes a grim turn and becomes fodder for a PBS documentary about elder abuse and religious violence when the narrator meets "an old man who wouldn't say his prayers" and accordingly takes "him by the left leg" and throws him "down the stairs."

And for potentially life-threatening injuries, you can't beat the hapless infant's plunge from the treetop at the end of "Rock-a-Bye Baby."

In contrast, the piggies from the rhyme that dates back several hundred years, always seemed like a merry lot. Sure, one stayed home, and one, for some reason, did not eat roast beef. But the wee-wee-wee was a squeal of porcine delight at the prospect of returning to the sty, right?

Yet the fate of the biggest oinker was always there in plain sight. It didn't go to market, it was taken to be marketed. It had no agency. It was a product, not a customer.

Wee-wee-wee becomes the fearful yet ultimately fruitless cry of a creature that realizes it, too, was born to be sold and eaten.

@AngelicGirlxD — her profile says she's from Brooklyn — was not the first to post on this topic. I searched and found several piggy truther discussion threads over the years. But her tweet has gone viral and so far prompted more than 3,000 responses, many of them anguished:

"My whole childhood was a lie." "I hate my newfound knowledge; ignorance was better." "I don't even know what's real anymore." "You've just made me very sad." "He died?!?!! Noooooooooooo!" And so on.

I posted click polls to Facebook and Twitter to try to measure reaction to this observation. On both platforms, only 18 percent of some 200 respondents claimed to have known that the first pig in the rhyme was not, in sad fact, off to pick up a few things at the store but instead was off to meet its maker. In comments, some have blamed illustrators of children's books for perpetuating the happier interpretation.

Eric Zorn is a columnist at the Chicago Trbune.