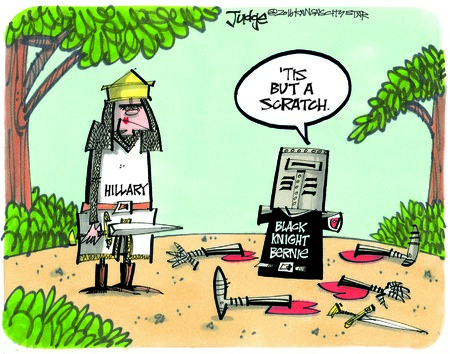 Hillary Clinton's book is due out next week. And judging by a page that was just tweeted by one of her staunchest supporters - not to mention plenty of other evidence - it's likely to include a heaping dose of score-settling.

That includes with Bernie Sanders.

In the passage that was tweeted out Monday evening by Tom Watson, Clinton attacks some of Sanders's supporters for being "sexist" and suggests the Vermont senator doesn't have the Democratic Party's true interests at heart. Most notably, she also intimates that he may not have even cared that his underhanded (in her opinion) attacks on her helped Donald Trump become president.

"When I finally challenged Bernie during a debate to name a single time I changed a position or a vote because of a financial contribution, he couldn't come up with anything," she wrote. "Nonetheless, his attacks caused lasting damage, making it harder to unify progressives in the general election and paving the way for Trump's 'Crooked Hillary' campaign.

"I don't know if that bothered Bernie or not."

Clinton continues: "He certainly shared my horror at the thought of Donald Trump becoming President, and I appreciate that he campaigned for me in the general election. But he isn't a Democrat - that's not a smear, that's what he says. He didn't get into the race to make sure a Democrat won the White House, he got in to disrupt the Democratic Party."

At the end of the page, Clinton concludes by saying: "I am proud to be a Democrat and I wish Bernie were too."

This, needless to say, isn't likely to help the Democratic Party heal any time soon. I've argued before that Clinton's decision to dwell upon the many allegedly unfair reasons for her general-election loss - Russia, James Comey, misogyny, debate questions, etc. - are likely to distract from the truly difficult work Democrats face in determining how they lost the Rust Belt to a historically unpopular nominee in Trump. Clinton seems to have far more interest in pointing the finger at everyone but herself. Perhaps her reasons are justifiable. But it also suggests that her and her party's serious shortcomings were unimportant.

Given the book's "What Happened" title and this past, it was clear Clinton would be doing a fair bit of blame-sharing in the book. What wasn't as clear was how much she would dwell upon Sanders' shockingly competitive challenge to her in the Democratic primary.

This passage doesn't exactly read like a take-no-prisoners accounting; it's more understated than that. Much of it is technically true. The tactics of the "Bernie Bros" were indeed often sexist. Sanders still isn't a Democrat, and he never claimed that his campaign was about helping the party - a party he long derided as insufficiently progressive. He clearly wanted to "disrupt" it to some extent. And the seeds of the idea that Clinton was corrupt were indeed planted and tended to in the primary.

"Because we agreed on so much, Bernie couldn't make an argument against me in this area on policy, so he had to resort to innuendo and impugning my character," she said.

Maybe that's just politics, you might say! Well, the Sanders-led opposition to Clinton always considered itself to be about principle, whatever the costs of taking that principled stand (even President Trump).

Clinton is not-so-gently questioning that entire conceit, saying Sanders' reasons for causing that upheaval weren't justified. She's suggesting his campaign was about political expediency and getting elected and doubts there was truly much difference between them.

For a candidate and a base of supporters who were adamant about their cause and those differences, that's going to sting. And linger. It's the equivalent of throwing gasoline on the embers that remain from the 2016 primary.