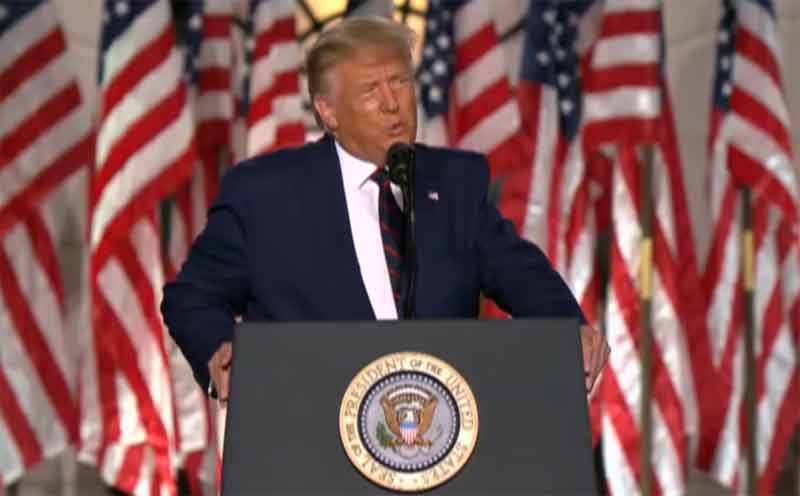 President Trump took over the Republican Party, but it's still discernibly the GOP.

The party's convention was obviously very Trumpy. At least one member of the family had a slot every night, and it featured plenty of reality-TV touches.

There are also notable differences of substance. Trump's party has reversed itself on trade and jettisoned concern over deficit spending. The party is much less hawkish than President George W. Bush's and much more skeptical of immigration than Ronald Reagan's. It doesn't have the focus of the 2004 convention on terrorism or the 2012 convention on entitlements.

And yet there is a clear through-line between today's Republican Party and the GOP of the last several decades. Someone transported from the floor of a GOP convention in the 1980s, '90s or 2000s to the Mellon Auditorium would unquestionably have known where he was.

Take Don Trump Jr.'s forceful speech, which by lineage and inclination should be most representative of the Trump GOP.

Sure enough, on trade and immigration, he hit distinctively TrumpÂ­ian notes. But much of what he said echoed high-profile speakers at past conventions. Trump Jr. argued that "Biden's radical left-wing policies would stop our economic recovery cold," in part by raising taxes.

This contrast with Democrats is a GOP commonplace. The keynoter at the 1984 convention during the high-tide of Reaganism, Katherine DĂˇvalos Ortega, the treasurer of the United States, hit Democratic nominee Walter Mondale for his long record "based on the idea of high taxes, big spending and more government regulations."

Trump Jr. called the former vice president "Beijing Biden" and said he's "weak on China." Harsh? Yes. But name-calling aside, Republicans have been hitting Democrats as weak for decades.

In his acceptance speech as vice president in 1984, George H.W. Bush referred to the "Carter-Mondale era of vacillation, of weakness, of lecturing to our friends and letting them down."

At the 2004 convention, Democratic Sen. Zell Miller scorned John Kerry as "more wrong, more weak and more wobbly than any other national figure."

Trump Jr. declared that "in the past, both parties believed in the goodness of America. We agreed on where we wanted to go. We just disagreed about how to get there. This time, the other party is attacking the very principles on which our nation was founded."

In her famous 1984 foreign policy speech, Jeane Kirkpatrick hit a similar note, saying that Democrats once "were not afraid to be resolute nor ashamed to speak of America as a great nation."

Trump Jr. underlined the importance of safety and security and hailed the police as great American Â­heroes.

Again, back in 1984, then-Vice President Bush said, "President Reagan and I think it's time that we worried less about the criminals and more about the victims of crime."

"My dad is pro-school-choice," Trump Jr. averred, whereas Democrats are "bowing to big money union bosses." New York Mayor Rudy Giuliani in 2008 boasted that the GOP is "the party that believes that parents should choose where their children go to school."

Republicans have long promoted national pride and national strength, or as Trump Jr. put it, "this land of promise and opportunity — of heroes . . . and greatness." Chris Christie ended his keynote speech in 2012, before anyone besides Donald Trump thought of Donald Trump running for president, by declaring, "together, we stand up for American greatness."

This perspective sheds some light on the future of a post-Trump GOP. In the main, it's not likely to be radically different from the current Trump GOP. As Michael Barone argued recently in The Wall Street Journal, America's political parties are great institutions that change gradually while preserving an identifiable DNA.

If this week's convention has again demonstrated Trump's personal grip on the party, it also showed that the Republican Party as it has existed for decades isn't going away.