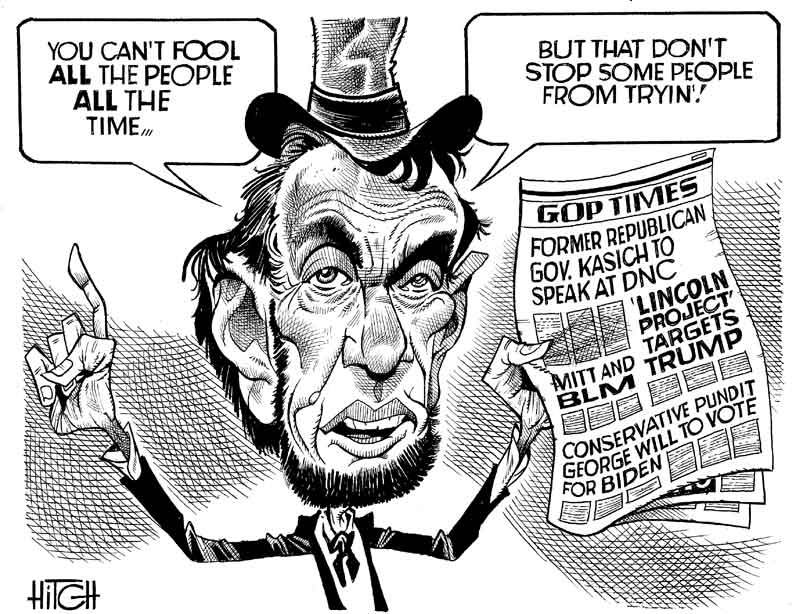 The number of Republicans speaking at the Democratic convention has progressives on edge.

They shouldn't fret. Even if a handful of estranged Republicans come along for the ride, the left is steadily moving the Democratic Party in its direction. Do progressives prefer winning the optics at a virtual convention, or the substance over the longer term?

So far, the Democratic convention has been notably bereft of policy, focusing instead on President Donald Trump's character failings — rehearsed at length — and Joe Biden's empathy and decency. Together with all the speakers with a Republican pedigree, this has reinforced Biden's image of being more moderate than he is, which is perhaps his greatest political strength.

There is obviously no percentage in him running as the most progressive presidential nominee in a couple of generations. It's much better to portray himself simply as a good guy whose tent is so broad it stretches from AOC to the former secretary of State for a Republican president many progressives think was guilty of war crimes.

It's not as though Biden has been pulling from the Republican A-Team, though. By this point, it'd be shocking if Colin Powell didn't endorse the Democratic candidate for president.

Christine Todd Whitman, the former governor of New Jersey, found George W. Bush too divisive for her taste. Chuck Hagel served as President Barack Obama's Defense secretary. John Kasich, a Republican presidential candidate in 2016 and the two-term governor of Ohio, is more of a get, but still, if all of these figures were collectively asked to go build an audience of Republican voters, they probably couldn't fill out a moderately sized Zoom call.

In his prominent Monday night speech, Kasich fulsomely endorsed Biden the man, without getting close to endorsing any of his plans. He said that Biden "knows the path to a restored America lies in respect and unity and common purpose for everyone," not exactly a detailed program or original sentiments.

The former Ohio governor alluded to his policy differences with Biden without, naturally, spelling any of them out. He cited Republicans and independents who might believe that Biden "may turn sharp left and leave them behind. I don't believe that. I know the measure of the man. Reasonable. Faithful, respectful and no one pushes Joe around."

Then, Kasich was followed on the program by Bernie Sanders, who boasted to his supporters, and not unreasonably, "Many of the ideas we fought for, that just a few years ago were considered â€˜radical,' are now mainstream."

Sanders delivered perhaps the strongest traditional speech of the first half of the convention. While he excoriated Trump, he also focused, more than others, on Biden's agenda and how he believes it will help people's lives. He thus got beyond the reductive bad person/good person dichotomy that has characterized much of the convention's rhetoric. He also implicitly took credit for Biden embracing more far-reaching measures on issues from the minimum wage to universal pre-K.

Kasich who makes assurances that Biden will not turn left? Or Sanders who says he's already turned?

It is true that Biden has avoided the most extreme and easily attacked versions of progressive proposals, whether the "Green New Deal," "Medicare for All," or defunding the police. But Biden is to Barack Obama and Hillary Clinton's left on most domestic questions. Sanders and others shifted the Overton window of Democratic politics, and Biden moved to stay smack in the middle of it.

The Biden campaign is, in this respect, trying to do what Hillary Clinton did four years ago, except even more so. As New York Times columnist Ross Douthat pointed out at the time, the Clinton campaign wanted to reach out to Republicans who couldn't abide Trump but gave them nothing on substance, in fact ran to the left of where she'd been most of her career.

Biden, too, expects Trump to do all the work pushing Republicans into his camp, without enticing them with any policy concessions.

This approach probably has a better chance of working this time, since Biden isn't as radioactive as Hillary and Trump can't run again as a take-a-flyer-on-me outsider.

And if Biden can actually pull off tacking Bernie's way on substance while running as a boring moderate, maybe he doesn't get the credit for political canniness that he deserves.

Yet, this is an evasion that represents a Biden vulnerability. The question is whether the Trump campaign can exploit it, which will require focused attention at the Republican National Convention next week, in advertisements, and at the debates. It won't be as easy as pinning every wild thing other Democrats say onto Biden.

But if Biden is allowed to coast through the fall with his current image not being seriously contested, well then, campaign malpractice will have to be added to the long litany of charges against Donald Trump.