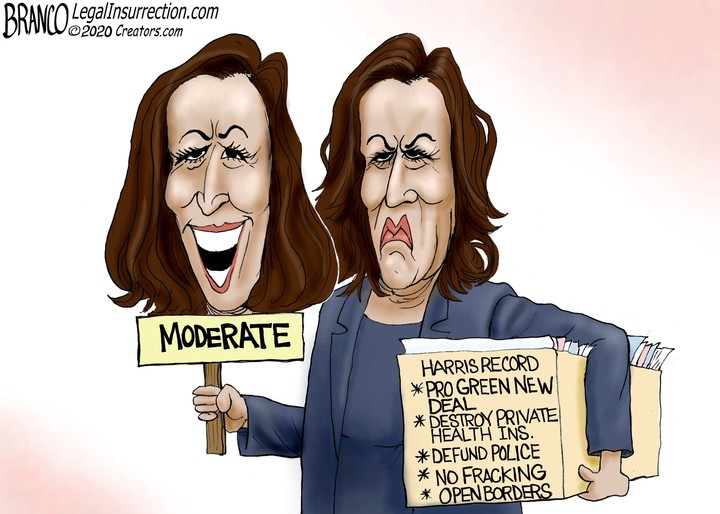 By the time the 2020 campaign ends, president-in-waiting Kamala Harris will have been transformed into the greatest exemplar of judicious centrism and political level-headedness in American history.

"Kamala Harris comes from the middle-of-the-road, moderate wing of the Democratic Party," claims George Stephanopoulos. Though The New York Times was the first to call Joe Biden's running mate a "pragmatic moderate," CNN concurred, as did a reporter on CNBC, who noted that Harris is "widely considered a moderate Democrat."

The Associated Press claims that she was picked for her "centrist record."

A writer for New York magazine wonders if progressives will ever be able to find it in their hearts to forgive Harris's "moderation."

David Byler at The Washington Post ratchets it up by declaring Harris is a "small-c conservative." (Drew Holden has a running inventory of this trend.)

Professional political analysts marveled at the alleged incongruity of the dueling GOP accusations that Harris was both a hardcore left-winger and "a cop," as if the use of state force is somehow alien to progressive ideological aims. I have news for you: Nearly every policy Harris supports will entail compelling Americans to participate.

According to GovTrack, Harris's record in the Senate, in fact, is more liberal than that of self-proclaimed democratic socialist Bernie Sanders. Harris was, apparently, least likely of all Democratic senators to join in any bipartisan bills. Then again, we don't really need a tracker to inform us that Harris has taken a host of positions that sit well outside the traditional political agendas — outside even traditional Democratic Party agendas. Is there a single issue in which Harris has not staked out a stance to the left of Barack Obama?

Now, obviously, everyone operates under the notion that the Democratic Party has a historical imperative to "evolve" leftward. Even considering this trajectory, there is no compelling case to be made that Harris is a "moderate" in either her political manner or her ideological disposition.

Sign up for the daily JWR update. It's free. Just click here.
As the National Review editors noted, Harris is at best a "moderate autocrat." She is, by her own account, an anti-constitutionalist. Literally laughing at the Constitution as a restraint of political power is just the start. Setting aside her long record of investigatory and prosecutorial abuses in California — including against ideological opponents — Harris will likely be the first candidate on a major presidential ticket to support gun confiscation and the creation of a gun registry. At one point, Harris promised to ban private health insurance. She supports ending all restrictions on state-funded abortion. She supports banning all fossil fuels within a decade. She supports the partisan packing of courts, in an effort to corrode checks and balances of American governance. And she has promised to pursue a number of these policies by circumventing the legislative branch if Congress doesn't take orders from her.

And the same reporters who take every mangled Trumpian assertion hyperliterally will treat Harris' contentions and positions neither seriously nor literally.

None of this is new. You might recall that when there seemed to be a chance that Sanders might capture the Democratic presidential nomination, columnists began whipping up think pieces to worries about his radicalism, wondering about his "conservatism" and other imaginary qualities of the Vermont senator.

Similar effort dominated Barack Obama's run for the White House, even though the future president told us that he planned to fundamentally change the nation. And after Democrats lost Congress from 2010 to 2014, the inability of Obama to move forward with his agenda was quickly framed as evidence of his moderation. Obama was always going to go as far left as was politically feasible — for instance, in his fight with moderate Blue Dogs on Obamacare — which is not exactly the same as having restrained aims.

Now, there's a strong argument to make that neither side is really captivated by the thought of centrism anymore. And we are all aware of the numerous arguments against Donald Trump's candidacy. Though temperamentally the president isn't anything approaching a small-c conservative, his policy aims are well within the centrist tradition. Trump is a largely unideological populist, whose views on trade, spending, the border and foreign policy — and a host of other major issues — are well within the mainstream. By any standard, he is more of a centrist than Kamala Harris.

Why isn't his agenda ever framed that way? Well, because the "center" of American politics will always be wherever the Democratic Party's nominees happen to stand.