College football is education, too 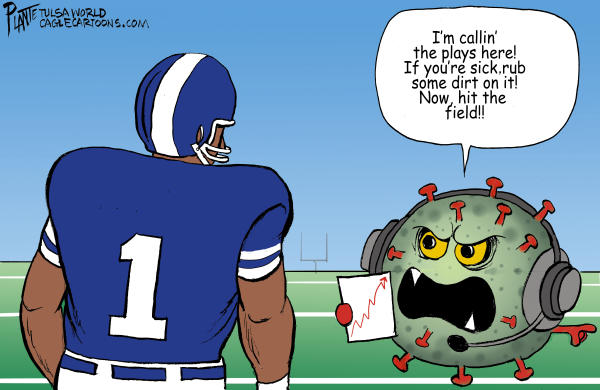 The University of North Carolina and Notre Dame have both suspended in-person classes because of an outbreak of covid-19 cases among students. Yet both will continue their athletic programs, including their football seasons. Despite the view that this is a sick inversion of priorities - putting sports over classroom learning - there is a case to be made that both schools did the right thing.

First, football has always been more dangerous than the core educational project of universities. The dangers of football include the risk of concussions, which turns out to have been greatly underrated, and more generally broken bones, sprains, fractures and the psychological trauma of constantly being banged up. It would be better for American society simply to abandon the sport, in fact.

Still, if football is to continue, it's not clear why covid-19 should necessarily stop it. The virus may not even be the sport's biggest major health risk.

So far the data are fragmentary, but they indicate that parties, bar-going and after-hours fraternization - not athletic practices - have been the major risks contributing to covid-19 clusters among young people of college age. For all the talk of banning athletics, how about university regulations banning all alcohol consumption (including off-campus) for all registered students, under the pain of academic suspension?

Yes, such regulations would prove difficult to enforce, but many students at the margin might be discouraged from going out to drink. And those who didn't want to go in the first place would have an excuse to stick with their studies.

There is the risk that football players and other collegiate athletes will bring the virus home to their parents and older relatives. Still, that danger seems to be at least as high if they are bored and going out drinking, compared to practicing and trying to secure their place on the team. It simply is not obvious that athletics create a new risk.

Under the current system, student athletes can opt not to participate, just as many NBA players have elected not to play in the league's "bubble." While there are social pressures to go ahead and play, they are no different than the pressures to socialize more generally. Yet there are no calls to ban young people from socializing, even though that too is clearly a dangerous activity - perhaps the most dangerous activity - in terms of covid-19 spread.

It's also a mistake to think of sports as a lesser form of learning and cognition. Sports teach leadership, real-time decision-making, psychology, intuition, discipline, and talent identification, among other valuable skills. That those skills are embodied in a physically competitive setting makes them no less valuable.

There are financial factors, of course, in the decision to try to keep collegiate sports going. But they need not be viewed cynically. Many U.S. schools rely on their sports teams to attract both student and donor interest. Auburn, Clemson, and the University of Nebraska are to some extent "football schools," providing a valuable signal to everyone involved. (Personally, I would rather attend a "chess school," but that is also what makes this system of branding work.)

Major athletic competitions also keep donors involved in universities, often bringing them to campus. The best tickets, or meetings with players and coaches, are perks handed out to major supporters. It is easy to sneer at these methods, but when the athletic impulse can be used to cross-subsidize other fields of study, it is a net benefit. It is noteworthy that America has both the world's best system of higher education and the one most integrated with large-scale athletic competition.


UNC has suggested it could lose up to $52 million if the football and basketball seasons are cancelled or significantly shortened. The negative momentum imposed on the school could result in even higher costs over the longer term.

The North Carolina football team is scheduled to have its first Atlantic Coast Conference game on Sept. 12, against Syracuse University. Notre Dame will also be playing in the ACC this fall, at least if current plans stay on track. In contrast, much of college athletics already has been canceled, including in football the Pac-12 and Big Ten competitions.

College has always been a time and place for young people to socialize, and it will continue to be so in a pandemic. The question is what kinds of activities should be allowed. If there is going to experimentation, it should include some attempts to keep alive the important institution of college athletics.