Jew-hatred poses as anti-racism in 'The New York Times' 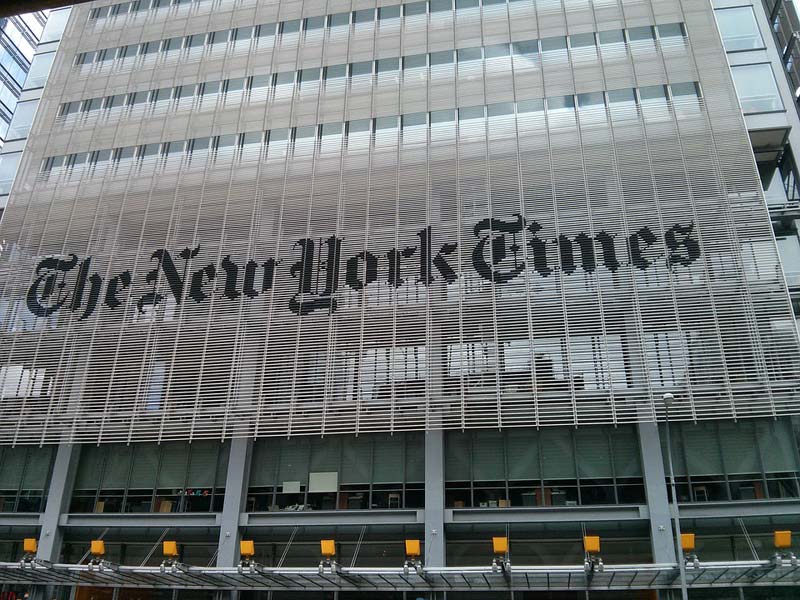 Discussions about intersectional theory used to be confined to the fever swamps of the far left. But this idea—the idea that seeks to link the struggle for civil rights in the United States with the Palestinian war on Israel's existence and every other cause that can be falsely portrayed as one of the underprivileged against the privileged—has now gone mainstream.

The latest evidence of the success of this attempt to dress up anti-Semitism in the clothing of human-rights advocacy arrives with the new edition of The New York Times Sunday Magazine, which includes an article titled, "How the Battle Over Israel and Anti-Semitism Is Fracturing American Politics" by Israel critic Nathan Thrall.

Thrall's object is to justify BDS campaigns that anchor the debate about the subject in "Black-Palestinian solidarity" and the effort to view the war on Israel through the "racial justice prism." The result is an 11,000-word essay that seeks to subtly paint Zionism as inherently racist and efforts to destroy Israel as idealistic efforts to defend human rights. The article's thesis is also to portray the pro-Israel movement's effort to push back at anti-Semitic attacks as tainted by prejudice against African-Americans and fueled primarily by the heavy-handed efforts of Jewish donors to manipulate the Democratic Party.

One of Thrall's primary sources is former Deputy National Security Advisor Ben Rhodes, who seeks to depict the struggle for the future of the Democratic Party as one that will be determined by whether its leaders learn to overcome the "fear factor" about losing the support of Jewish donors.

Thrall, an author of a book seeking to justify U.S. pressure on the Jewish state, gives a deeply sympathetic hearing to Rhodes' account of how the worries of Democratic politicians about retribution from the "donor class" (i.e., Jews) inhibited the Obama administration's efforts to hammer Israel even more than it did.

The article also amplifies Rhodes' specious claim that Obama's inability to persuade Israel's supporters to back him on the issue was due to racial prejudice. He claims that supporters of Israel assumed that Barack Obama was pro-Palestinian because he was black. Rhodes' thesis, which Thrall endorses, is that this alleged fear of Obama was the result of the pro-Israel community's understanding that the Jewish state really was "an oppressor." According to Rhodes, Obama's critics were "acknowledging, through your own fears, that Israel treats the Palestinians like black people had been treated in the United States."

This argument has it backwards. Jewish Democrats bent over backwards to maintain their faith that Obama had been sincere in his professions of support for Israel when he ran for president in 2008, in spite of evidence to the contrary, both then and later. Far from being prejudiced against him, most American Jews stuck loyally to Obama, despite his belief that more "daylight" was needed between Israel and the United States. They even supported his efforts to appease an Iranian regime that was bent on genocide.

The assumption that Palestinians and Israeli Arabs are treated the same way as the African-American victims of Jim Crow in the pre-civil-rights era in the South is a big lie. Israeli Arabs have equal rights under the law. Nor does the nation-state law passed last year by the Knesset impinge on any of their rights. The standoff about the future of the West Bank is because the Palestinians have repeatedly rejected offers of peace and statehood. They would have had attained independence long ago had they been willing to recognize the legitimacy of a Jewish state, no matter where its borders might be drawn. Those who accept these fallacious arguments are either ignorant of the conflict or expressing their own anti-Semitic mindset.

That's the problem with the BDS movement. Its supporters are not so much against alleged Israeli oppression as they are about the existence of Israel since they view the presence of even one Jewish state on the planet as one too many.


One example is the Jewish Voice for Peace group's "Deadly Exchange" protest mentioned by Thrall. It depicts the exchange programs that allow U.S. law enforcement and first responders to get Israeli training as responsible for police murders of blacks in American cities. That is a classic anti-Semitic blood libel. Yet it is presented by Thrall as one more example of how idealists are rejecting Israel.

Accepting the notion that there is a natural affinity between the effort to achieve equal rights for African-Americans and Palestinian efforts to destroy Israel requires a willingness to ignore the truth about Israel and that of the movement to destroy it.

More to the point, the article presents criticism of the anti-Semitic invective of Rep. Ilhan Omar (D-Minn.) as the result of racism.

The reason why Obama was criticized for his Middle East stands had nothing to do with his race, and everything to do with his refusal to accept that hatred for Israel and anti-Semitism was the obstacle to peace, not the pro-Israel community's racism or Israel's intransigence. If Omar is singled out for criticism, it's not because she's black or Muslim, but because, like the BDS movement she supports, she's guilty of flagrant anti-Semitism.

There was a time when intersectional myths seeking to conflate anti-black racism with Zionism and the Jews would be dismissed as prejudiced anti-Semitic claptrap that didn't deserve a hearing in a prominent forum like the Times. But that was before some on the left began their successful efforts to divide the Democratic Party and to legitimize anti-Semitism.

In the battle for the soul of the Democratic Party, it is Israel's foes that have embraced hate, not its defenders. It is they who talk about Jewish money, while trying to delegitimize the Jewish state and whitewash its enemies. Liberals who wish to reclaim their party's integrity, and that of the flagship publication of their movement, have an uphill struggle in front of them.