Sanders' campaign escalates fight with Dems in reprise of 2016 rifts 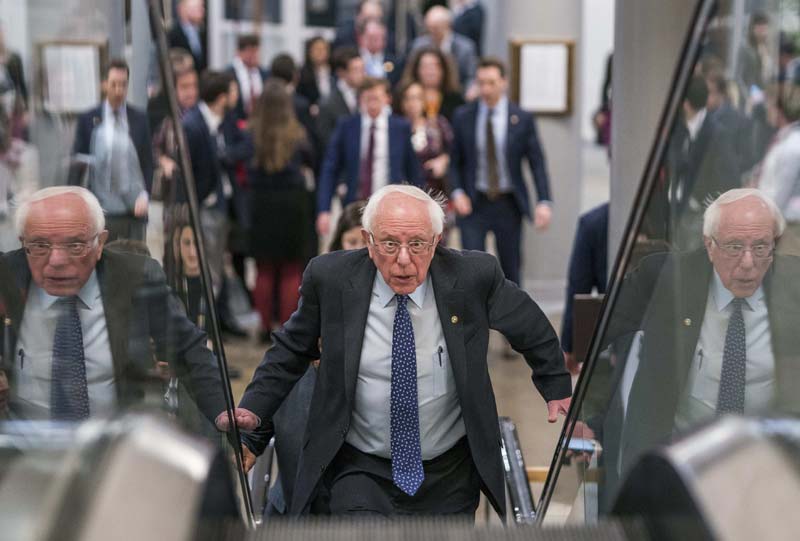 WILKES-BARRE, Pa. - Campaign advisers to Bernie Sanders escalated their attacks on a major Democratic-leaning think tank Monday, accusing the group of using corporate donations to mount a "consistent effort to belittle or demean" the independent Vermont senator while seeking to "kneecap" populist support for policies such as Medicare-for-all.

The onslaught, coming as Sanders sits atop national 2020 polls of declared presidential candidates, was the clearest signal yet that he plans to reprise his role as a disruptive insurgent who will run against established Democratic Party institutions even as he seeks the party's nomination.

"I think this time around he wanted to make sure that people understood that he wasn't just going to be a punching bag," said Sanders' campaign manager, Faiz Shakir, in an interview at the Mohegan Sun Pocono, where Sanders addressed members of a nurses union. "He's comfortable having the fight within the party or outside the party, in general. That's Bernie Sanders."

In a sign of Sanders' newfound power, the targeted think tank, Center for American Progress, or CAP, sought to defuse the conflict Monday afternoon with a conciliatory message.

Sanders has been upset about a video by ThinkProgress, a project of an independent affiliated organization, called Center for American Progress Action, or CAP Action. The video described how Sanders had reduced his use of the term "millionaires" to describe the nation's wealthy after he personally earned more than $1 million in 2017, largely from book sales.

The president of the think tank, Neera Tanden, released a statement Monday saying she had no editorial control over the publications of CAP Action or its news website ThinkProgress, but nonetheless disagreed with the tone of the video.

"The orientation of CAP is to positively engage with all political leaders about the country's future," Tanden said in a statement. "We believe the content of the ThinkProgress video critiquing Sen. Sanders is overly harsh and does not reflect our approach to a constructive debate of the issues."

After the statement was issued, Shakir, who is a former editor at ThinkProgress, said he welcomed the contrition and hoped to meet soon with Tanden to further discuss their disagreements.

"We appreciate the statement. It affirms one of the concerns Senator Sanders had," Shakir wrote in a text message. "Look forward to working in a more productive manner if possible."

But lingering distrust remained between the two organizations, and by extension two wings of a party still nursing wounds from a tense and divisive 2016 primary campaign pitting establishment favorite Hillary Clinton against the insurgent Sanders.

CAP was founded in 2003, by John Podesta, a former adviser to President Bill Clinton who later served as the chairman of Hillary Clinton's 2016 campaign. The group, for which Hillary Clinton raised money, played a major role in providing a policy foundation to the first term of President Barack Obama's administration, and several CAP officials, including Podesta, went on to serve in the Obama White House.

As recently as last year, Sanders attended a CAP ideas conference, where he thanked the group "for all the important work" it had done, and was praised onstage by Tanden. But sharp disagreements over policy began to burst into public view last week, when Sanders reintroduced his Medicare-for-all plan on the same day that CAP had previously scheduled an in-person briefing for reporters on an alternative plan backed by the think tank, called Medicare Extra for All.

Under Sanders' plan, government-backed health care would supplant the current private employer system. Under the CAP proposal, individuals would be able to choose between their current plan and a government-run option. There have been other policy disagreements as well. Tanden personally sided with Clinton over Sanders in a 2016 debate about how quickly to raise the federal minimum wage, calling for a $12 increase, not a $15 increase. CAP, as an organization, did not take a position on that issue at the time.

Realizing the two health-care events would happen on the same day, Tanden said she called Ari Rabin-Havt, Sanders' campaign chief of staff, to make sure he knew it was not an intentional slight. The following day, a ThinkProgress article about Sanders' millionaire status was published, without the knowledge of Tanden or the CAP leadership, the organization said. The article called Sanders' millionaire income "very off-brand and embarrassing."

Rabin-Havt called Tanden to complain about a line in the article that mocked Sanders' physical appearance. Tanden passed on the complaint to the head of Center for American Progress Action Fund, Navin Nayak, who answers to a different board of directors. He passed the complaint onto the editor of ThinkProgress, Jodi Enda, without explicit instructions to make a change, said people familiar with the conversations, who spoke on the condition of anonymity to discuss internal deliberations.

The subsequent publication of a video on the same topic detailing Sanders' shifting rhetoric further infuriated the Sanders campaign, prompting Sanders to write a letter Saturday to the boards of both CAP and CAP Action denouncing Tanden by name for "maligning my staff and supporters and belittling progressive ideas." The letter was first reported by the New York Times.

"Senator Sanders felt very strongly about this one," Shakir said about the origin of the letter. "He sees that as an effort to kneecap, undermine the effort, the populist support that exists for Medicare-for-all."

The Sanders campaign then sent out a fundraising email Sunday that took an even more aggressive tone, calling CAP a part of "the corporate establishment" that is "bankrolled by billionaires and corporate executives that profit from finance, pharmaceutical companies, fossil fuels, and sending American jobs overseas."

The CAP website lists its corporate donors, which do not include any 2018 contributions from pharmaceutical or fossil fuel companies. People who work at CAP and CAP Action pointed out that because Shakir used to work at ThinkProgress, he was aware of the editorial wall between the think tank and the liberal news and commentary operation.


Other candidates, including Sen. Cory Booker, D-N.J., and Sen. Elizabeth Warren, D-Mass., have received critical coverage in ThinkProgress, which also has written tough stories about CAP and Tanden's handling of a recent sexual harassment scandal at the organization.

"ThinkProgress is in charge of its content. CAP has not criticized Sen. Sanders in any shape or form," Tanden said in an interview Monday. "Our goal is to be engaged with and open to all candidates."

Other Democrats saw Sanders denunciation of CAP as a worrying sign at the start of the 2020 campaign, which could herald a potentially destructive path that Sanders intends to pursue for the party's nomination.

"I think his tone in general is too Trumplike. It's based on anger," said Greg Hale, a longtime Democratic presidential campaign adviser who worked for Clinton in 2016. "We all need to be together and we need to have a positive message, not a negative message."

But as Sanders wrapped up a four-day campaign swing through the Upper Midwest on Monday, there were clear signs that his approach had appeal in five states Clinton lost in 2016, including three that were major disappointments for Democrats: Michigan, Wisconsin and Pennsylvania.

At his events, the crowd displayed lingering animosity toward Clinton and her allies.

"Establishment Democrats have to stop holding him back," said Linn Anderson, a graphic designer from Youngstown, Ohio, who attended a town hall Sanders participated in Sunday.

Asked whether she felt there was still animosity coming from Clinton's allies, Anderson responded, "Hell yeah."

She said that she attended the 2016 Democratic convention and that "it was extremely sickening" the way Sanders' backers were treated.