Should I go public about an incident in 2009 between Michelle Obama and myself? 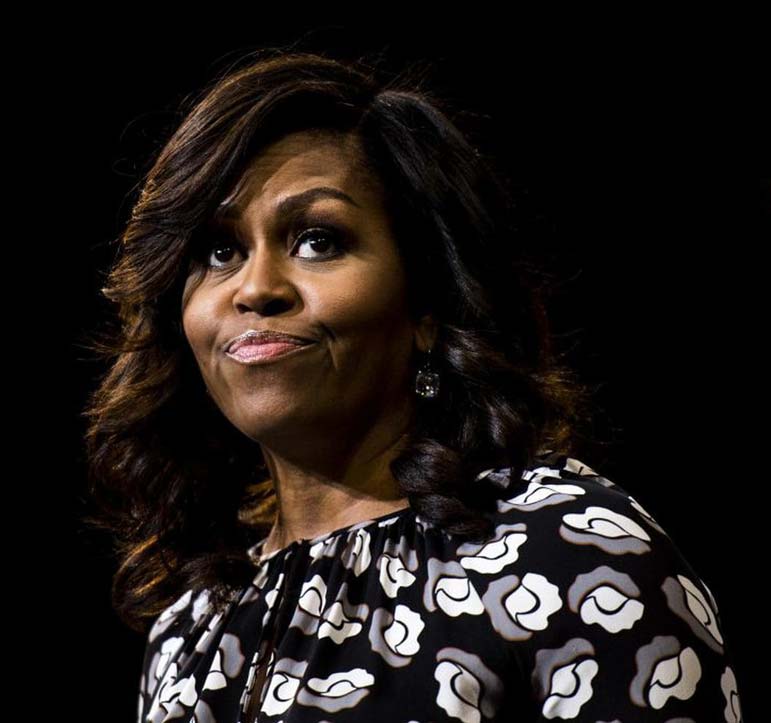 I have been struggling this week, looking deep within myself, questioning my own values, asking myself: should I go public with the incident in 2009 when Michelle Obama put her arm around me at a luncheon in Washington?

She was posing for photographs with the attendees and I had been the guest speaker and I was told to stand next to her and I did and she put her left arm around my back and pulled me toward her and squeezed. It was a perceptible squeeze.

I didn't say anything at the time but I remember feeling that this was her idea, not mine, that I probably would've preferred to shake her hand, but what are you going to say to the First Lady? "Get your arm off me"?


She didn't place her forehead against mine or kiss the back of my head, nothing like that, but the squeeze was unmistakable and intimated familiarity.


I don't come from a huggy family. My wife does. I don't. In my family, a pat on the back is considered sufficient, but when my wife walks into a room full of Keillors, she goes from one to another, throwing her arms out and clutching them to her, and they have to stand there and accept it or else look like soreheads.


People like us — white, Anglo, Midwestern, formal, reluctant to make eye contact, uptight, stiff, boring — are ridiculed, by comedians of color and also colorless comedians, and we have learned not to object. "Where's your sense of humor?" people would say, so we laugh at the stereotype even though we don't find it funny.


I don't go around smiling. It doesn't mean I'm unhappy; it's simply the culture I was born in.

The photographs of my ancestors that we kept on the piano showed solemn bearded men and severe women and their gloomy children, no incisors visible whatsoever. My dad and uncles didn't smile a lot. They associated smileyness with salesmen trying to charm you into buying a ten-year-old Dodge with a loose clutch and rust around the bumpers. I went off to college and, in order to be hip, read existential writers about the indifference of the universe to human suffering, while chain-smoking Luckies and drinking espresso, which tends to solemnize a person as well.


On account of my seriousness, people are always asking, "What's wrong? Is something the matter?" I call this demeanorism, judging people by their facial expression. Inside, I'm pretty lighthearted but on the outside, I look as if I've been struck by a baseball bat and am trying to remember my name.


The squeeze that I experienced was ten years ago and I'm not saying it was traumatic but I do wish she would take ownership of it and express some regret at having ignored my feelings, and then I have a sudden sensation in my rear end, a suspicious flatness, and I reach back and there is no wallet there, and suddenly I'm up and running from room to room, checking pockets, looking under tables, calling up cafes I've patronized the past couple days.


This is the bright red wallet my wife bought me after I left a black wallet on the seat of a taxicab late one night and it occurs to me that this wallet loss, coming a month after the previous, may be what convinces her I need help. Tomorrow there'll be a power-of-attorney form to sign and consultation with a series of people in white uniforms who take notes as I'm put through a battery of tests involving matching shapes on little wooden cubes, and my wife, who loves me dearly, will break the news gently. There is a care center that specializes in elderly men with cognitive issues. It's called Sunnyvale and it has a triple-A rating from the AARP and there is shuffleboard and checkers and color TV in every room and a sing-along on Saturday nights where the elderly gather to sing Grateful Dead and Rolling Stones hits.

For a moment, it occurs to me that maybe Michelle Obama reached around me to lift my wallet out of my back pocket.


And then I find it. It's in the freezer. I set it down when I was getting out the frozen waffles this morning.