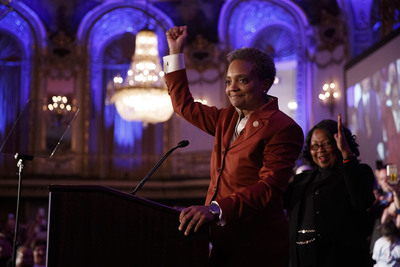 Now that is mayor-elect of , many voices will tell you how history was made:

The first woman elected mayor of , a lesbian, and a reformer in a corrupt city. Lori, with that devilishly dry sense of humor, in the town historically bossed by pink guys.

You think that's historic, and it all involves identity politics, but how about something even more fundamentally symbolic of change than skin pigment or sexual orientation: is the first former federal prosecutor, in modern times anyway, elected mayor of .

A fed for mayor?

Perhaps is ready for reform after all.

But I remember a voice on the phone back in September. There were no trumpets in it. It was a small voice, anguish flowing along a broken reed, a voice angry and bone tired.

It was on the phone. And she was disgusted with politics.

Mayor -- finally conceding the obvious -- had pulled the plug on his re-election bid.

And just like that the campaign had flipped. The campaign of reform ideas versus a cynical pol who hid that video from public view? That campaign was gone, replaced by the anointment of an establishment successor.

Chairman and , son of boss, bro of boss; Illinois Comptroller ; and lobbyist and former school board President . I called these four the post-Rahmulans, establishmentarians who got in the race only after Emanuel withdrew. They wouldn't fight him for . But once he was out, they eagerly swooped down.

Lightfoot was being pushed to the margin of history. And she knew it.

"The media coverage disturbs me," Lightfoot told me back in September. "To see the media focused solely on the horse race and the powers that be anointing a winner without regard for citizens should be disturbing to everyone.

"This notion that city government and the mayor's office is pirate booty ripe for the picking is offensive," Lightfoot said.

Of course, it is offensive.

Preckwinkle had the buzz. She had the ground game with the public sector workers unions backing her. has been conditioned by the syndrome of its politics to yearn for a boss. And the common wisdom had one of the establishment post-Rahmulans as the new mayor.

Lightfoot had built her campaign to take the moral high ground and take Emanuel down. But when Emanuel pulled his own plug, the city was about to go tribal again and allow a post-Rahmulan to win.

But then came the brown butcher paper.

The FBI raided the offices of powerful Alderman and covered the windows in brown butcher paper to protect the hunt from prying eyes.

Burke was on an FBI wire courtesy of Alderman the chairman of the who liked visiting massage parlors.

And just like that Burke was served up in the mayoral campaign as if he were a crown roast of veal, all pink and trussed.

He was charged on a federal extortion count. Preckwinkle's relationship with Burke -- how he raised $116,000 for her, and how she gave Burke's son a $100,000-a-year Cook County job, became a regular feature of news coverage and commentary. Lightfoot, a former federal prosecutor, grabbed the opportunity.

The campaign flipped back again, to reform versus corruption and cynicism. That's when things began to change.

I preferred to stick with the meat metaphor I started with, but Lightfoot went all astronomical on me on my podcast "." She compared Burke to a meteor that hit the campaign.

"I think this Burke moment has really been a wake-up call for people," she said. "Strangers are stopping me on the street, telling me to keep making the case. This meteor that hit is really waking people up, and we're going to keep riding that lane."


The odd thing was that Preckwinkle really couldn't stand Burke when she was an alderman from . Timing is everything.

She became the chairman, an unthinkable move when she was that earnest independent with sensible shoes. She took Burke's money. She protected Burke's son, even while laying off hundreds of other workers.

She became liberal boss. And it cost her the fifth floor of .

There will be much said about Lightfoot's victory. Many who ignored her in those difficult days after Emanuel pulled out, and those who jumped on the Lightfoot bandwagon late and wrote campaign checks, will now flatter her and give her advice.

Lori, I've got some advice too. You'll be mayor and everything will change. You'll be on the list of possible 2020 vice presidential candidates. Charmers will swoop in from and to find out what you want. They'll track your every appetite. They'll be your new friends.

But you don't need new friends. This is . Stick with friends who were with you back in September, back when you were down and Rahm was smirking and the insiders were measuring the drapes. And if you insist on examples of those who made new friends, I've got two words for you: .

has elected its first black woman mayor. But her skin color is what she was born with.

made herself into a federal prosecutor with her will and smarts and the content of her character. A fed as mayor of ? Inconceivable a few years ago. Now, it's necessary.