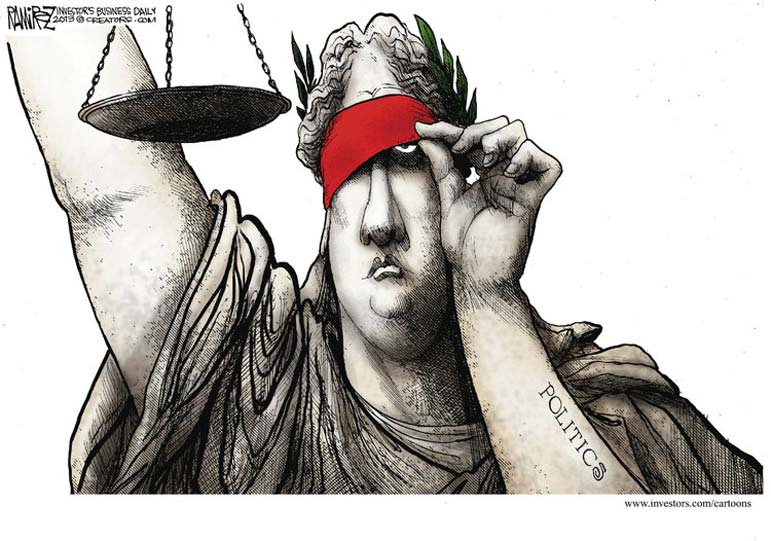 The brilliance of our country's founders is revealed in many things but especially the checks on power built into our system of government.

The Constitution is grounded in the natural-law principle that human beings derive their rights from God, not from government. On a more temporal level, governmental powers are deemed vested in the states, which delegated certain limited and enumerated powers to the federal government. (The Tenth Amendment to the Constitution states this explicitly.)

At the federal level, legislative power is vested solely in Congress, and this acts as a check on the power of the president to issue decrees. (No kings for Americans.) The executive branch is responsible for enforcement of the law, not its creation.

The power of the federal courts is similarly balanced. The president nominates all federal judges, including U.S. Supreme Court justices, but these nominees must be confirmed by a majority of the U.S. Senate. The Supreme Court may only hear the kinds of cases dictated to it by Article III of the Constitution, but the lower federal courts derive their authority to hear cases from statutes written by Congress.

Within the bicameral Congress, there is also a balance. The number of congressional representatives in the House is determined by each state's population. More populated states like California, New York and Florida therefore get to elect more representatives than less populated states like Rhode Island, Wyoming or Hawaii. In the U.S. Senate, by contrast, each state has equal representation — two elected senators for each state, regardless of population. Because no federal legislation can pass without a majority of each chamber, rural and less populated states are not shut out of the legislative process by states with huge urban centers.

But there are other checks and balances that are less widely recognized as such. The existence of a free market means that business enterprises and other voluntary associations provide goods and services so the government does not have to. Open economic competition ensures that a single company (or a handful of companies colluding with one another) cannot utterly dominate the marketplace. Conversely, proper regulation by government protects the public from abuse of power by private corporations.

The First Amendment, too, is a vital restraint on government overreach. The Free Exercise clause prevents government from obliging or forbidding particular worship or religious practices. Freedom of speech and the press should mean that expression is encouraged; ideas may be challenged; and government should be held accountable.

The brilliance of the founders in creating this system of checks and balances was their understanding that human beings, regardless of race, ethnicity, religious belief (or lack thereof), prior condition of oppression or political persuasion will abuse power if given too much .

When we look at abuses of power throughout history, we tend to assume that the perpetrators simply sought power for their own ends. Some may have. But far more people seek power because they want to improve the lot of their fellow man, and they're sure their way is the only way to do it.

But well-intentioned people, too, will abuse power if they obtain too much.

The beauty of our system is that it's set up so that widespread changes in policy require widespread agreement. If you cannot persuade a significant majority of the people, you lose. If neither side can convince a majority of the public that its ideas are worth pursuing, we have deadlock. This is not a bug; this is a feature.

Democrats are upset that they have lost so many of the recent state elections, congressional elections and presidential elections (not to mention the federal judicial appointments that accompany them).

But rather than work on their skills of persuasion, Democrats are pushing for more raw power: Can't win the Electoral College? Time to abolish it! Don't have a majority of "progressive" activist justices on the Supreme Court? Time to expand it and give the next (Democrat) president six new picks that will approve whatever legislation the new (Democrat-controlled) Congress passes! Can't stop people from eating at Chick-fil-A? Ban the restaurant!

And it isn't merely Democrats in government. Their "progressive" counterparts in academia and Silicon Valley tech companies are doing their best to silence opposing viewpoints, shut down debate and demonize anyone who doesn't parrot DNC talking points as a racist, a bigot and a hater.

For their part, our largely left-wing media has abandoned its sacred duty to protect the people from oppressive government, in favor of serving as the propaganda arm of the Democratic Party — deceiving the public, covering up for favorite candidates and demonizing responsible journalists who tell the truth, even when it casts the left in a bad light.

Americans have good reason to reject Democrats and their destructive policies. Illinois' corruption and burdensome taxation is chasing residents and businesses out in record numbers. Parts of San Francisco and Los Angeles look like Third World countries, the streets filled with homeless people, drug addicts and the mentally ill, block after city block littered with used hypodermic needles and piles of human feces.

But these people want to run the whole (SE ITAL) country .

Similarly, government-run health care for veterans and Native Americans is some of the worst in the country. But Democrat presidential candidates Sens. Bernie Sanders and Kamala Harris are calling for the elimination of private insurance (thereby destroying thousands of private businesses and putting millions of people out of work) and placement of 328 million Americans on government-provided health care.

And if a majority of Americans doesn't agree? Well, then they'll just eliminate the rules that obstruct them, until they're in control anyway