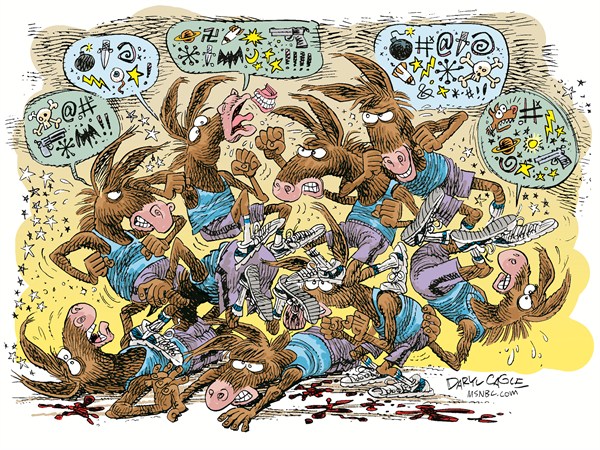 But the common hatred of President has united otherwise quite disparate Democratic leaders such as House Speaker (D-Calif.); former Vice President ; Sens. (D-Calif), (D-N.J.) and (D-Mass.); and Reps. (D-N.Y.), (D-Mich.) and (D-Minn.).

These diverse progressive politicians all shared faith in special counsel and his "dream team." They believed over the last two years that the Mueller investigation was slowly grinding down Trump. T-shirts were sold with the slogan "God Protect ."

The unifying progressive creed assumed that the Mueller's team would eventually find Trump unequivocally guilty of "collusion" with . That buzzword was the non-criminal euphemism for felonious conspiracy to rig an election.

The hunt for collusion would end with the holy grail of Trump's impeachment and removal from office. In 2020 there would be an almost automatic progressive takeover of government.

Periodic leaks from Mueller's team during the investigation's 22 months prompted giddy media anticipation that "the walls were closing in on" Trump. It always seemed that the "noose was tightening" around him, and that yet another "bombshell" was about to go off.

This anti-Trump echo chamber lessened the need for progressives to offer a comprehensive, coherent and winning alternate agenda. Damning the sure-to-be-impeached Trump was unity enough. All progressives at least agreed on that.


But as Mueller was supposedly about to indict Trump, a divisive, hard-left agenda was almost imperceptibly floated to the public: the Green New Deal, reparations for slavery, abortion redefined as permissible infanticide, open borders, packing the Supreme Court with liberal justices, the abolition of the and ICE, free college tuition, the elimination of student debt, Medicare for all, a wealth tax, a 70 percent top marginal income tax rate, a 16-year-old voting age, voting rights for ex-felons, and on and on.

It seemed as if today's radical proposal would become yesterday's sellout within 24 hours, as progressives awaited tomorrow's even more revolutionary idea.

While progressives were celebrating the seemingly inevitable Mueller indictment of Trump, they were also increasingly at odds over many of these divisive and mostly unpopular new issues and over the self-created paradoxes of identity politics.

When he was not declaring Trump guilty of treason, , a lifelong beneficiary of wealth and influence, did his best to blast his own past white privilege.

Socialist presidential candidate , when he was not predicating Trump's impeachment, talked in the abstract, as if an old white guy like himself in the concrete had no business running for president.

Current front-runner , when he was not gloating over Trump's supposed guilt, tried hard to trash his own white male culture as the root of many of America's problems.

How odd that three of the anti-white-male party's leading presidential contenders were none other than the white male trio of Biden, Bernie and Beto.

Now, Mueller has gone, his report having found no evidence of an election conspiracy. There is no longer a rallying cry of Trump-Russia collusion.

In other words, an investigation that for two years had reconciled the irreconcilable serves no longer as a source of Democratic unity.

We are going to see hard-left and socialists force their mostly unpopular agenda on politicians and candidates from their own party. And they are now putting their identity-politics money where their mouth is by openly discouraging candidates on the basis of their race and gender.

With the end of the Mueller investigation, thousands of government documents, mostly unredacted, will be released. The result may be that the hunters of Trump soon become hunted by federal prosecutors. Sworn statements of Obama administration officials in the , CIA, FBI and other bureaucracies will contradict newly released documents.


To escape punishment, all of these players in the Russian collusion delusion may now begin to turn on one another after being so united in going after .

The media sensationalism and optics will play out in reverse as the "noose tightens" and "the walls close in" on people such as former CIA Director , former Director of National Intelligence , former FBI Director and former FBI Deputy Director .

There will also be more infighting over the collective embarrassment of the Russian collusion hoax.

A few shamed progressive politicians and reporters will grow quiet and acknowledge their overreach. But many will double down and weirdly insist that there really was Russian collusion and that the Steele dossier was true. Most will remain unashamed and simply move on to the next supposed Trump scandal.

Progressives in unison boarded the Mueller express to nowhere. As they now jump off the train wreck, the fighting won't be pretty.