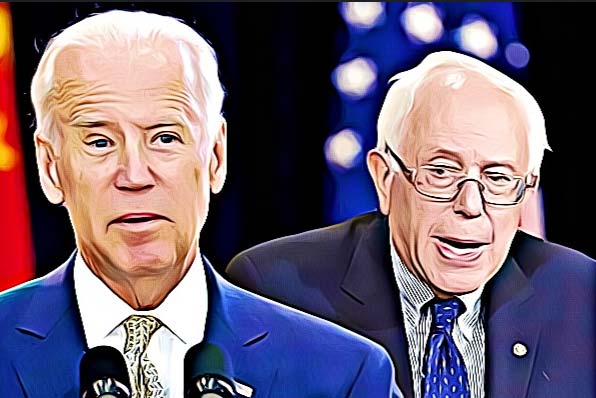 President Donald Trump was asked by reporters outside the White House on Friday how old was too old to be president.

He compared himself to former vice president Joe Biden, who declared his candidacy for the 2020 Democratic presidential nomination on Thursday.

Was Biden too old?, Trump was asked.

"I would never say anyone is too old," he replied, "but I know they're all making me look very young, both in terms of age and I think in terms of energy."

Trump was half-joking when he declared that he felt like a young man. At 72, he isn't, though he is slightly younger than Biden, 76. Corny machismo is a feature of the pair's relationship, with each at various points suggesting that they could beat the other in a fistfight. It goes broader than that for Trump, though, who regularly insists on his own stamina and resilience.

Again, neither man is young. They're way down at the far end of the distribution of the U.S. population.

Former Texas congressman Beto O'Rourke, 46, is known for jumping up on tables to give speeches at campaign events. It's hard to imagine Trump doing something similar.

Interestingly, the two Democrats and one Republican who are polling the best at this point - Biden, Sen. Bernie Sanders, I-Vt., and Trump - are also the three oldest candidates in the race. Each of them is older than about 8 out of every 10 Americans. By contrast, South Bend, Indiana, Mayor Pete Buttigieg and Reps. Tulsi Gabbard, D-Hawaii, and Eric Swalwell, D-Calif., are each younger than about 6 out of every 10 Americans.

There is an important way in which Trump is actually significantly younger than Biden: His political career has been much shorter. One of the reasons this has been a tricky rollout for Biden, extending back before his formal announcement, is that his flirtations with running drew a renewed focus on his political history. He's been in Washington for more than four decades, during which time he's weighed in on a number of political issues, many controversial.

We can illustrate that problem simply. The General Social Survey that's now conducted every two years has been asking Americans since 1973 if men are better suited to politics than women. In 1973 - the year that Biden was first sworn in as a senator - 44 percent of Americans felt that they were, including 40 percent of Democrats.

By the time House Speaker Nancy Pelosi, D-Calif., arrived in Washington, only about 3 in 10 Americans thought men were better suited. (The current figure is 13 percent, with Republicans more than twice as likely to hold that view.)

Consider, though, that this is the political world into which Biden stepped. Views on a broad swath of issues, not just gender, shifted dramatically while he was in Washington. His own positions shifted, too, as various articles about his possible candidacy have noted.

Trump is young in the sense that his political positions were only offered sporadically, on cable news and then on Twitter. Trump benefited in 2016 from being unknown as a politician, allowing him to make various claims about his positions that were hard to back up. (And some that were hard to defend, like his claim that he opposed the war in Iraq, which he didn't.) Less experienced candidates keep beating more experienced ones - Trump, Barack Obama, George W. Bush, Bill Clinton - in part because it's easier for voters to make generous assumptions about what they believe.

We're on a tangent here that's unrelated to what Trump was actually saying. What he was saying, instead, is that he's a young 72 and Biden an old 76. He was reinforcing his constant claims that he's better constituted as a human being than his opponents.

Appearing on ABC's "The View," Biden waved off Trump's comments.

"If he looks young and vibrant compared to me," Biden said, "I should probably go home."