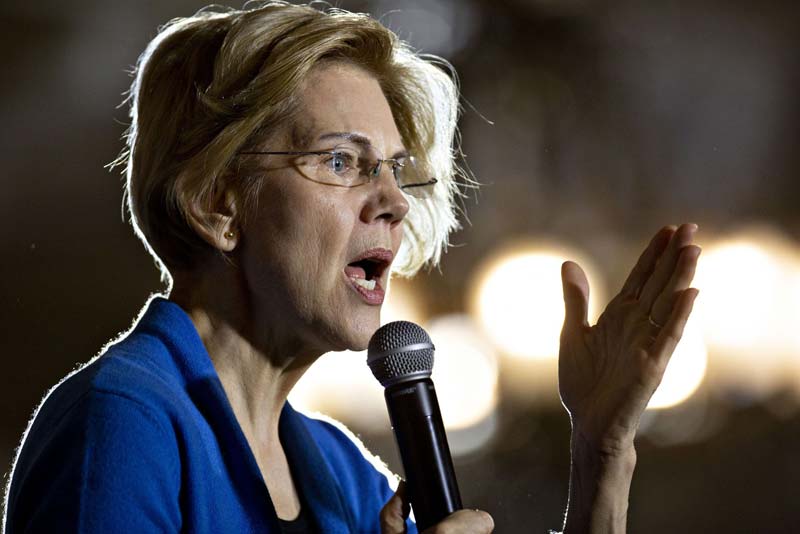 While most other presidential candidates of the Democratic kind are tiptoeing around the question of impeachment proceedings against you know who, Sen. Elizabeth Warren says he is definitely guilty of high crimes, including collusion with the Russians or something an awful lot like it.

Therefore, she tells us, the House must get going and act against this worst of all presidents who received bountiful help in the 2016 election from Russia and then told his fellow Putin admirers to keep it coming.

I did not know this Harvard law school professor had bought a Sherlock Holmes hat and was out investigating for two years at the same time as special counsel Robert Mueller and his team and actually found out more about collusion than they did. But wait. It's maybe not evidence motivating her. The thing is, she has not been getting a lot of attention, donations or support in the polls.

I know, I know, that's cynical and a guess, but impeachment proceedings would be nothing more than chaos afflicting us all, seeing as how our legislators can't chew gum, act out tragedies and pass important bills at the same time. The fire and fury would likely come to nothing, even with phony obstruction charges being front and center, because the Republicans who constitute a majority in the Senate would not produce the two-thirds vote necessary for eviction.

This issue tells us just part of the Warren story, however. For instance, she does not seem to grasp the importance of our overwhelming debt and the interest that has to be paid yearly and is working its way to being equal to all revenue. Spending is the chief culprit of what bipartisan experts say could be a massively destructive crisis, and note for starters that Warren is for the Green New Deal.

Here is a plan that would do away with fossil fuels, make everyone buy electric cars to replace what they have, require inspection of every building in America, incentivize more family farming and probably make it necessary for everyone to invest in candles. Renewable fuels just won't get the job done, and even if they did we are talking about spending elusive trillions and upheaval that could well be worse than the Great Depression.

Tens of millions of voters will love Warren for getting rid of $640 billion of the $1.5 trillion student loan debt by just possibly making it part of the national debt. She also figures on making two-year and four-year public colleges free if you can't afford the tuition. She has a plan to start an optional, subsidized, nationwide day care program, free for many and relatively cheap for others. She wants to get lower rent by getting cities to change their land use policies and spending $500 billion for new and refurbished homes over a decade.

She backs a Medicare for all plan that would do away with private insurance companies and lower medical fees enough to degrade care enormously. The cost would still be about $32 trillion over 10 years, it's estimated.

A couple of these programs might make sense if we could afford them, but we cannot and there are cheaper solutions.

Warren does have a plan to pay for all of this. She wants an "ultra-millionaire" 2 percent wealth tax on assets over $50 million of the richest Americans (not a lot of voters) and more than that if they have more than a billion hanging around. She also wants high estate taxes for such people, not getting it that taking money out of the private economy for government to spend ends up in less investment and sales and fewer jobs and lower wages. If the money were being raised to pay down the debt, I could applaud.

Please note as well that Warren wants a law that would enable the imprisoning of CEOs of especially big companies for crimes underlings committed without their knowledge. This "negligence" law would be an unjust abomination. As a socialistic maneuver, she wants to require corporations to represent workers on their boards of directors and she was also a key player in establishing a wholly partisan, mightily aggressive federal agency unaccountable to Congress.

In my own mind, I have impeached Warren as a candidate, but if you believe in fiscally imprudent, authoritarian big government and destitution, vote for her.