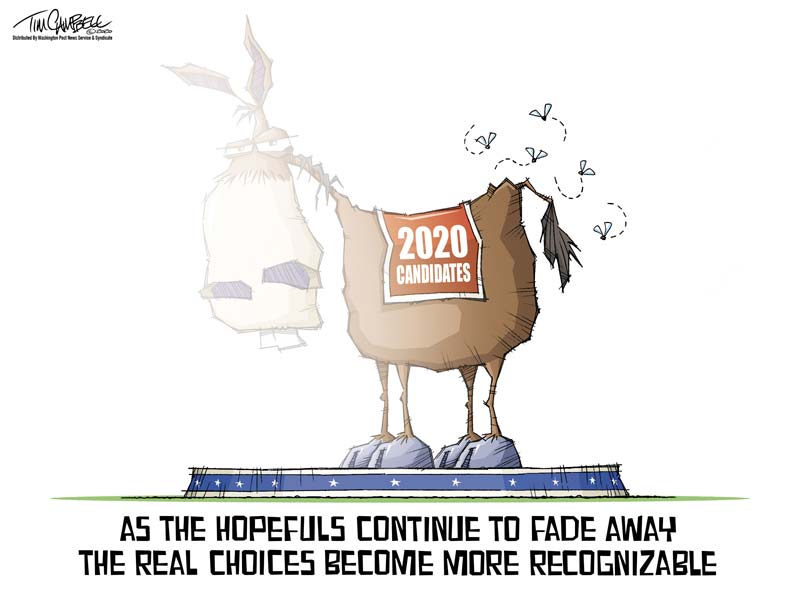 LAS VEGAS - Iowa was a historic debacle. New Hampshire was a little too close. Nevada was something else for Sen. Bernie Sanders: a blowout that revealed both the scale of his new coalition and the crabs-in-a-barrel inability of other Democratic candidates to catch him.

The Nevada results have not reset the race, but they've clarified it, revealing the strengths of some candidates, the shrinking opportunities of most others and how one good debate performance can rattle everything.

That was the nickname Rep. Alexandria Ocasio-Cortez, D-N.Y., bestowed on Sanders, I-Vt., at his post-heart-attack comeback rally in Queens. It appeared on T-shirts and got chanted at rallies - all the way through the raucous downtown party that Sanders volunteers held in Las Vegas after the vote. Sanders earned it, dominating with Latino voters in a way that could ripple through the next month's primaries.

There has been a lot of attention paid to constituencies that Sanders has lost ground with. Latinos aren't one of them. The 2016 entrance poll of Nevada found Sanders winning 53% of Latino voters in a two-way race; this year's entrance poll, in a six-way contest, found Sanders with 51% of the Latino vote. While he once edged out Hillary Clinton for Latino voters, in Nevada he tripled the support of his nearest rival, former vice president Joe Biden, who pulled 17% of Latinos. Sanders had spent years appealing to Latino voters, organizers had spent months canvassing them in neighborhoods other candidates ignored, and it paid off.


The Latino vote is not a monolith; Sanders polls notably behind his national averages in Florida, where Cuban immigration has created a more conservative Latino electorate. But in Nevada, Sanders' Latino advantage was the biggest any candidate had with any demographic.

If the former vice president's campaign had a theme in Nevada, it was that nonwhite voters deserved a louder voice in the nomination process and that if they got one he would win. "Until now, we haven't heard from the most committed constituency of the Democratic Party," Biden argued on the night of the New Hampshire primary.

But that constituency is not rallying around Biden like it used to, or like he needs it to. According to the entrance poll, Biden won 39% of black voters in Nevada, a clear plurality and 12 points better than Sanders. But four years ago, Hillary Clinton won 76% of the black vote in Nevada, compared with 22% for Sanders. The senator from Vermont actually increased his share of black support this year despite the divided field, to 27%.

Biden's coalition will struggle to win, or to put up big margins, without winning more black voters. In 2008, 78% of black South Carolina primary voters went for then-Sen. Barack Obama, and in 2016, 86% of them went for Clinton. Talk of a Biden "firewall" in the South is based, in part, on comparisons to candidates with much broader black support. (Biden has also dismissed "firewall" talk, telling CBS News on Sunday that it was the media, not him, setting expectations.)

Biden needs it because he's struggling with white voters in this primary more than either of those eventual nominees. Biden won 14% of Nevada's white voters, running behind former South Bend, Indiana, mayor Pete Buttigieg and tying Sens. Amy Klobuchar, D-Minn., and Elizabeth Warren, D-Mass. Diverse Clark County was the only part of Nevada where Biden ran second; outside the mega-county, he ran fifth behind the field, according to exit polling and early results.

• The path for the other white moderates is vanishing

Buttigieg came out of Nevada with a new theme, that the party can pick him as an alternative in a slog between Sanders and former New York mayor Mike Bloomberg, attacking "Sanders' vision of capitalism as the root of all evil that would go beyond reform and reorder the economy." Klobuchar came out with a perfunctory speech, reminiscing to voters in Minnesota last night, again, about the snowstorm that nearly ruined her campaign launch 378 days ago.


She had a mixed week in Nevada, drawing some decent crowds but getting just as much attention for blanking on the name of Mexico's president during a Telemundo interview and spending two days off the trail for fundraisers. Warren's breakthrough debate performance sliced right through Klobuchar's gains; while the Minnesotan beat Warren by 12 points with voters who made their minds up "in the last month," she lost to Warren by 13 points among voters who made up their minds after the debate. Before the debate, as the early vote totals revealed, Warren was on track for a collapse in Nevada. The debate pushed her back ahead of Klobuchar, just as the New Hampshire debate pushed Klobuchar ahead of Warren.

The same restructuring process that required caucus states to record their popular vote encouraged states to drop caucuses altogether. Most states did so - North Dakota, Wyoming and three territories (American Samoa, Guam and the Virgin Islands) will hold caucuses that resemble Iowa's and Nevada's.

On the margins, that's not good for Sanders, even if he wins former caucus states such as Minnesota and Colorado next month. In Nevada, with 60% of precincts reporting, Sanders has carried about 33% of first-preference votes. But the Sanders turnout operation helped him dominate the county convention delegate count. A precinct with seven Sanders voters, one Biden voter, one Buttigieg voter and one Warren voter, for example, would have delivered every county convention delegate (CCD) to Sanders, as only he had crossed the 15% viability threshold.

That meant, for Sanders, that winning a third of the vote (so far) has been worth nearly half the CCDs. In 2016, when caucuses picked hundreds of delegates, these rules were fantastic for Sanders. The upside for Sanders' opponents now is that the popular vote is more competitive, drawing out more unlikely voters.

That same caucus math, which pushed Steyer far out of contention for delegates, made it look like the investor-turned-candidate had imploded. His support was actually more solid than it had been in either previous contest: Steyer is on track to win about 8% of all first-preference votes and 16% of the black vote. That's close to what the sparse public polling projected.

At one level, it's an indictment of Steyer's massive spending, which swamped every other Democrat in Nevada. But it suggests that Steyer really has made few inroads with black voters, enough to remain a factor in South Carolina, where he just qualified for Tuesday's debate. There were eight candidates for this nomination before Nevada, and there are eight candidates for the nomination today. The field is simply not shrinking, which is the biggest gift to Sanders of them all.